When you think of sea creatures that instantly strike terror in the hearts of everyone, you generally think of ferocious sharks or giant man-eating squid. While those are rarely, if ever, encountered, this bottom dwelling worm is far more common and far more gruesome. It is the bobbit worm (Eunice aphroditois), and it is one of the most vicious and mysterious predators the ocean has ever seen. These worms burrow their 10-foot long bodies into the substrate, sticking their head out of the sand slightly to expose their five antennae to the world as they sit and weight for passing prey items. Anything that gets too close, as you can see from the video above, gets snagged up and dragged to a presumably horrendous death.

Scientists know little about what goes on after the worm drags its prey under. They assume the fish (in the case above) is injected with some sort of neurotoxin or other paralyzing agent that allows it to be consumed and digested without much of a struggle. After all, these are just worms after all, and they have soft tissues that can easily be torn apart by a struggling fish.

The worm moves lightning fast, and because it is so long, it has quite a bit of leverage as nearly its entire body is buried in the sand. It’s a deadly combination, and combined with that elaborate headgear, it leaves us peeing in our wetsuits just looking at the video.

For the aquarium world, bobbit worms are surprisingly common. Often mistaken for the relatively harmless bristleworms, these worms can go undetected for years, growing to massive lengths and decimating the population of fish and invertebrates in an aquarium.

Image and video taken from Wired 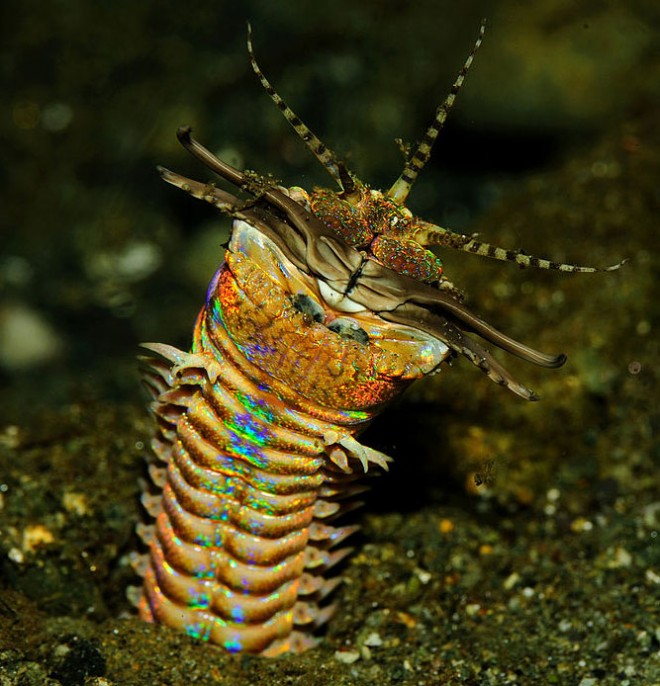