Trending
You are at:Home»Aquarium Equipment»All This Can Be Yours for $4000 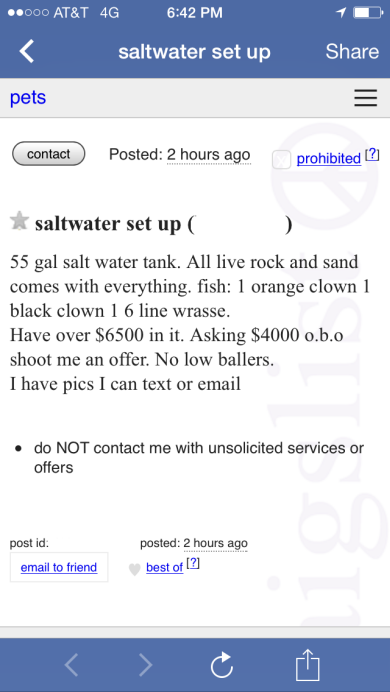 As any hobbyist will tell you, keeping an aquarium can be very expensive. More often than not, you’ll sink thousands of dollars into even a basic setup, as you have to purchase the tank, stand, rocks, lights, and so on. When it comes time to move on, most people want to get as much out as they can…usually in hopes of funding another build but sometimes they are just moving on to something different in life. There’s no shame in trying to get as much back on your investment as possible, but sometimes people are just dreaming if they think they will get back as much as they one.

Case in point, the individual posting this sales ad on Craigslist. If you’ll oh so carefully read through the text, you might noticed that this person is attempting to sell a 55-gallon saltwater aquarium for $4000. That’s right, four grand for a 55-gallon tank. Seems preposterous, so let’s see what he (or she) throwing in to sweeten the deal. He’s offering sand and rocks. That’s a step. How about his fish or corals? I’m seeing one orange clownfish, one black clownfish, and a six line wrasse. That might be $100 worth of livestock. And to top it off, a nice line about not wanting to be bothered by lowball offers. Is this ad for real?

Public shaming aside, there is a valuable lesson to be learned here. The loss of value on used aquarium equipment is significant. It depreciates the moment you splash a little water on it, and you’d be very lucky to recoup 40-50% on anything, and that’s if you sold things individually. Packages that consist of a  multiple items or fully functioning setups (such as this one) command even greater discounts. Not everyone gets this fact, as we can see a good example here, and far too often people will sit on their items until they either become irrelevant on the market or they finally start entertaining the lowball offers. Be careful not to wait too long, however, as your window of opportunity to sell the items may dry up.