Trending
You are at:Home»News»100+ New Species Recently Discovered in the Philippines (sourced from: smithsonianmag.com)

Shallow waters can be easily explored by divers and the deep sea is now starting to be scanned by robotic submersibles. But there’s an in between part of the ocean where its too dark for divers to see and too shallow for bots to bother with. The area 150 to 500 feet deep is called the Twilight Zone, at the California Academy of Sciences. And recent expedition to those mysterious waters just off the coast of the Philippines revealed more than 100 new species, reports Grace Singer for KQED Science.

“More people have walked on the surface of the moon, than have visited the Twilight Zone,” Steven Bedard of Cal Academy told Singer. In this case, skilled divers used special equipment that recycles their breath by filtering out unused oxygen from the carbon dioxide in their exhalations to make the visit. The team also used decompression chambers to help marine life survive the transition from the depths to the surface. This video from the Academy explores the technology. 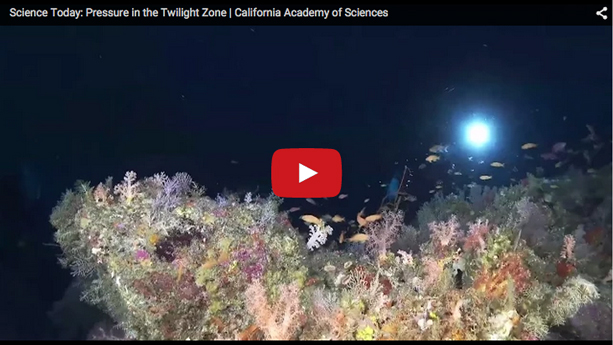 This recent dive was part of an exploration of The Coral Triangle, a marine area in waters near Indonesia, Malaysia and the Philippines and stretching to Papua New Guinea. It’s known to nurture important and diverse marine animal populations including tuna and six of the seven marine turtles in the world. Singer reports:

Among the countless specimens collected on the most recent expedition were vibrant sea slugs, barnacles, urchins, and 15 live fish from the Twilight Zone. In addition to the plethora of new species, researchers saw the first-ever living examples of animals whose existence had been known only through skeletons.

One new kind of heart urchin had been discovered in 2014, but only as a skeleton. During this recent dive, the researchers found a living version adorned with pinkish-white spines. Also newly identified is a hot pink and orange sea slug (also called a nudibranch), an invertebrate called a tunicate sporting dark purple vein-like patterns and vibrant blue sea squirts.

The dive actually helped researchers discover more than 40 new varieties of nudibranch, particularly in one site near the Philippine harbor of Puerto Galera, a press release from the academy by Haley Bowling explains.

“This remarkable stretch of coral rubble was carpeted in colorful nudibranchs,” says one of the principle researchers on the expedition, Terry Gosliner. “It was like an underwater Easter egg hunt. It was one of the most exciting scientific dives of my 50-year career.”

Some of those creatures will be on view at an exhibition scheduled to open next year at the Academy.