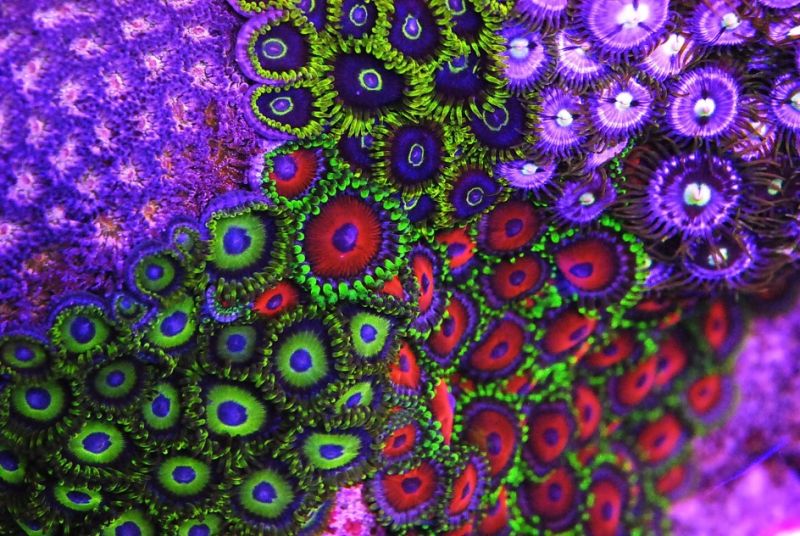 Safety is critical when dealing with Zoa and Paly corals.  It is advisable to always wear protection for your skin and eyes when handling coral in or out of the aquarium.

Recently we spoke to a coral grower who suffered an unexpected injury while handling coral from the palythoa species. By his account, the grower was merely relocating a fallen coral from the bottom of his aquarium when the coral stung him so badly that the pain brought him to his knees.  Within a matter of seconds he said the initial pain went away so he didn’t really think about it again.

Later that evening our friend had company over and had long since forgotten about the sting he received from the tiny little coral earlier in the day.  However, on the next morning he woke up to a hand and arm which had swollen considerably and exhibited red “track marks” going up the veins.  His friends immediately took him to the emergency room.  When he walked in a Dr. saw his arm and placed him straight into quarantine in case he might have been contagious.  After they pumped him full of antibiotics and he regained consciousness three days later he was met by someone from the Center for Disease Control (CDC). The doctor later told him that he probably would have died if he had waited a few hours longer to show up at the emergency room.  Palytoxin entered at the point of a small cut on one of his fingers and directly into his bloodstream.

Palytoxin is an intense vasoconstrictor and is considered to be one of the most toxic non-protein substances known.  Palytoxin can enter through the skin, eyes and mucous membranes.  Sessile invertebrates like Zoanthid and Palythoa species can squirt liquid and palytoxin out of their oral disks as a defense mechanism.  This liquid can get into your eyes and cause significant discomfort or even worse.

Moral of the story, wear protective gloves and eye protection when handling live corals! When you are finished handling the corals wash your gloves off in the sink while you are still wearing them and then wash your eye protection after you have safely removed your gloves.  Safe Reefing!