Trending
You are at:Home»News»Jumping Snails Prevail In Warm, Acidic Waters 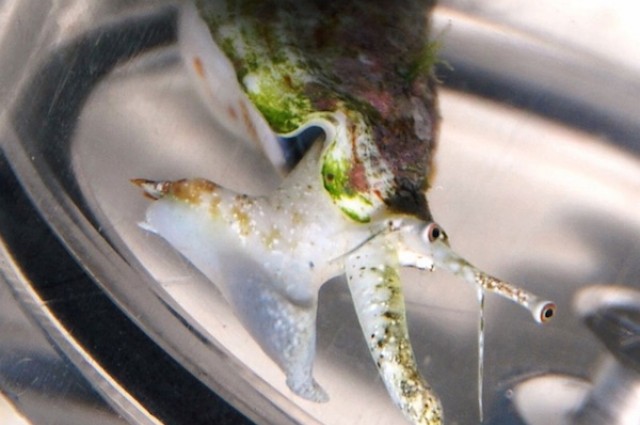 To escape predatory cone snails, the humpbacked conch (Gibberulus gibberulus gibbosus) can jump around vigorously for up to five minutes. This reflex requires hefty amounts of oxygen consumption – which could be problematic with future climate warming and ocean acidification. According to new findings published in the Journal of Experimental Biology, these athletic mollusks can still safely leap out of harm’s way under warm, acidic conditions that would kill most reef fish.

Researchers expect tropical coral reef organisms to be especially sensitive to ocean warming and CO2 increases since many already live close to their upper limit in terms of temperature. But little is known about the thermal sensitivity of snails and slugs. So, University of Oslo’s Sjannie Lefevre and colleagues collected humpbacked conchs from the Lizard Island Lagoon in the Great Barrier Reef of Australia between November and December of 2013. Because the snails burrow about 5 centimeters (2 inches) down into the sand, a team of snorkelers had to gently rake the sand to expose them.

Then, the researchers induced jumping by exposing the conchs to cone snail odors. “Almost as soon as you inject the odor into the respirometer, they start jumping,” Lefevre explained to Inside JEB. And oxygen levels in the respirometer immediately plummeted: Jumping caused a four- to six-fold increase in oxygen uptake.

The researchers discovered that even at 38 degrees Celsius, the conchs continued to leap. At that temperature, most other species divert their energy to combating heat. The team also found no effect of elevated CO2 on respiratory performance at any temperature – not even when CO2 levels were increased to simulate conditions projected for the year 2100.

Their habitat rarely exceeds 32.6 degrees Celsius (90.7 degrees Fahrenheit) during the summer, so the jumping conchs seem to have aerobic capacity in excess of their current and future needs. But that doesn’t mean the future will be smooth sailing: More snails were reluctant to jump in high-CO2 water. Lefevre, however, is optimistic that enough of them will retain the ability to sniff-out predators and leap to safety.