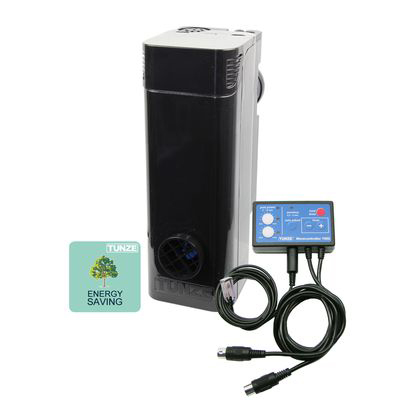 Introduced in 2004, the Wavebox 6212 was the first product of its kind.  A true wave generator that did not use paddles or dump buckets.  It instead combined the principle of resonance frequency with the displacement of the box as the pump cycled off and on.  Still to this day, other pump manufacturers have adapted the resonance frequency concept to produce a wave but without the displacement, two pumps are generally needed, one on each side, using twice as much energy for a generally smaller wave.

To explain it simply resonance frequencies are inherent in all structures, it is a frequency which allows energy to build so one wave collides additively with another.  In this way a small amount of energy can build to dramatic effect.  Each tank dependent on size and layout will have one frequency, generally between .30 and .80 seconds in typical home aquariums of 3-8 ft in length, that will produce this wave effect.  By combining displacement the Tunze Wavebox is unleashing a greater amount of energy in each pulse as the box empties and fills with each pump cycle.  The alternative is two pumps cycling in an inverse frequency to create a “push/pull” effect, this of course uses more power and generally results in a smaller wave.  Tunze’s latest controllable Stream models can do this natively with the included 7090 controller, but the Wavebox does it with less electricity consumption and to greater effect.

The current line up includes the 6208 Comline Wavebox for aquariums up to 200 gallons, at the heart is a 6055 stream pump.  The 6214 replaced its predecessors 6212 and 6215 and is suitable  for aquariums up to 370 gallons.  It utilizes a custom pump that is essentially a hybrid of the 6105 and 6155, pump 6215.200, designed to maximize the wave effect while reducing noise created from rapid on and off cycling.

The main advantage of the 6214 over its forerunners is a focus on reducing noise through isolating the box from contact with the glass by silicon isolators between the box and the magnet holders.  It is also more aesthetically pleasing with its more modern, contoured design.

The benefits of a wave flow in the tank are many, the primary effect is a lifting and suspending action, which helps keep debris from accumulating on the tank bottom and keeps it in the water circuit where it can be removed by the filtration.  Most users report increased polyp extension as well.  The wash of waves back and forth encourages feeding and keeps the food suspended in the water column.  The wavebox is not suitable for all tanks and is rarely the best source of primary flow, it is instead best combined with a directional flow current as the water washes back and forth with no real direction.  Exceptions are non photosynthetic corals and anemone focused tanks.  For anemones in particular the wave flow is extraordinarily safe, there is no exposed pump to suck in the soft bodied animals. The wave amplitude and frequency are primarily determined by the tank dimensions, a long narrow tank will see the biggest wave, on tanks shorter than 5ft the wave, while present and useful, will be unnaturally fast.  Roughly ¾” of the wavebox protrudes from the water surface, this can restrict use in tanks with heavy bracing.  You must also have sufficient room to accommodate a wave of ¾”-1.5″, while the wave amplitude can be adjusted, with a wave much shorter than ¾” the beneficial effect is largely lost.  It is also important to keep in mind that any surge or wave effect stresses the tank seams and it should never be used on a tank of questionable construction or age or one which is on an unlevel or insufficiently sturdy stand.  You can calculate the volume of the wave by calculating in inches the (length * width  * height/2 )/231.  On a typical 180, each wave pulse has a volume of roughly 5.6 gallons, and a frequency of .roughly .6 seconds, which means almost every half second almost 50 pounds of water are moving back and forth and creating a phenomenal flow of over 32,000 gph, this energy should not be underestimated, but the same holds for all means of creating a surge or wave flow.