Trending
You are at:Home»News»Japan Will Continue To Slaughter Whales, Despite International Ban 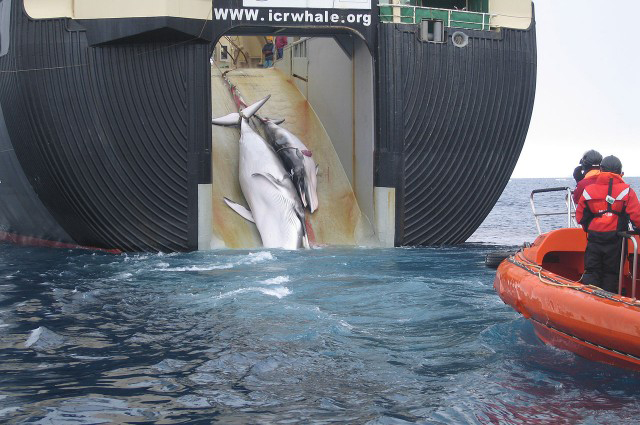 We were warned, and now the time has come: Japan is setting sail for the Antarctic tomorrow, resuming their condemned whaling activities after a hiatus of more than a year.

Almost 30 years ago, signatories of the International Whaling Commission’s moratorium were to end commercial whaling, but this wasn’t a mandatory agreement and some countries, like Norway, objected and used loopholes to continue their hunts. For example,exceptions were granted for subsistence whaling activities by aboriginal communities, or for population management in whale sanctuaries.

In addition, whaling was permitted for scientific research purposes, an excuse used by Norway, Iceland, and Japan, although their annual catches were restricted. Japan claims that it is conducting ongoing research on whale maturation, and in the absence of “verified” non-lethal sampling methods, whales would continue to be slaughtered until the feasibility of non-lethal techniques is established.

These “scientific” hunts have been slammed by governments and conservation groups alike, who assert the brutal activities have no scientific basis and are completely unnecessary. Furthermore, Japan has been accused of fiddling data on its catches, possibly invalidating a large number of studies that depended on these population figures and suggesting that a significantly larger number of cetaceans were caught than reported.

In a bid to end the bloodshed, Australia instigated a case against Japan, which ultimately resulted in victory, with the International Court of Justice (ICJ) ruling the country’s practices of killing almost 1,000 minke whales a year illegal. Under increasing pressure from groups like Sea Shepherd, which had actively thwarted their hunts, Japan took a year-long break from whaling but declared, despite the ICJ’s ban, that it would resume this December.

As warned, on December 1, a Japanese fleet consisting of three visual collection vessels alongside the 7,300-tonne (8,000-ton) Nisshin Maru “mother ship” will head to the Antarctic to kick-start activities under a revised plan. Alongside conducting non-lethal research such as surveys and biopsy collection, 333 Antarctic minke whales will be caught annually as part of a “capture survey.”

That doesn’t mean the fight is over, though. Japan may have chosen to ignore the ban and continue its violent whale slaughtering, but Australia’s government intends on challenging their activities once again. Not only is Australia working on developing suitable non-lethal methods for whale research, but they may also send out a ship to keep an eye on the Japanese fleet which may act as a deterrent, at least from slaughtering more than their quota.

Reprinted without permission from IFLScience.