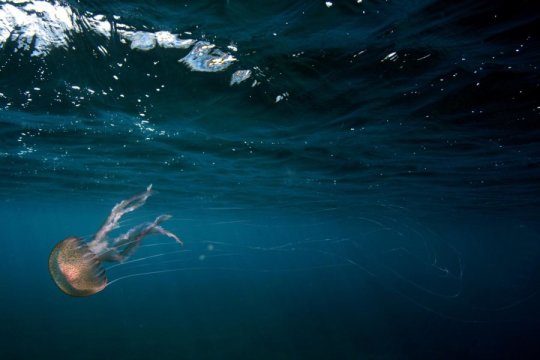 A jellyfish living in high CO2 waters near volcanic seeps in the Mediterranean.
Credit: Jason Hall-Spencer

Territories changing due to ocean acidification

Ocean acidification may well be helping invasive species of algae, jellyfish, crabs and shellfish to move to new areas of the planet with damaging consequences, according to the findings of a new report.

Slimy, jelly-like creatures are far more tolerant of rising carbon dioxide levels than those with hard structures like corals, since exposed shells and skeletons simply dissolve away as CO2 levels rise.

The study, conducted by marine scientists at Plymouth University, has found that a number of notorious ‘nuisance’ species — such as Japanese kelp (Undaria pinnatifida) and stinging jellyfish (Pelagia noctiluca) are resilient to rising CO2 levels. Published in Research and Reports in Biodiversity Studies, it notes that in the tropics, coral reefs face a host of interconnected problems (bleaching, corrosion, disease, spreading seaweed, invasive species) that are all caused by rising CO2 levels.

“We are witnessing the spread of marine life that cause problems — such as toxic jellyfish blooms and rotting algal mats,” said Professor Jason Hall-Spencer, lead author of the report. “Based on a synthesis of evidence available to date, we predict the problems associated with harmful marine life will get worse in response to rising CO2. Pathogens like cholera do not recognise national borders so seawater warming is a health issue for cities like London, and it remains to be seen which organisms will spread and cause problems as Arctic shipping routes open up.”

The study arose from observations at volcanic sites in the Mediterranean, where Professor Hall-Spencer has led expeditions to record what forms of marine life cope well with higher CO2 levels. They found that invasive species of algae and jellyfish had a tendency to thrive in acidic conditions. Their extensive review of laboratory experiments reveals stand-out cases such as so called ‘Killer algae’ (Caulerpa taxifolia), which is spreading worldwide, that benefit from higher CO2 but are so toxic that native herbivores die of starvation rather than eat it.

The report highlights the American slipper limpet, Crepidula fornicate, as an example of ocean acidification both helping and hindering a species, with evidence to show it has spread to Europe to become one of the 100 most invasive species, while at the same time, the species’ larvae has been placed at greater risk of predation due to reduced shell growth. Similarly, both the Red King Crab, which has invaded the Barents Sea, and the predatory snail Urosalpinx cinera, which has moved from the north west Atlantic to the north east Atlantic and Pacific, impacting upon oyster and scallop aquaculture in the process, have also demonstrated a marked reduction in larval survival and growth.

“Observations show there will be winners as well as losers as CO2 levels ramp up, just as there were in previous mass extinctions,” said researcher Ro Allen. “The spread of harmful marine organisms should be factored into risks of rising CO2 emissions.”

The above post is reprinted from materials provided by University of Plymouth. The original item was written by Andrew Merrington. Note: Materials may be edited for content and length.