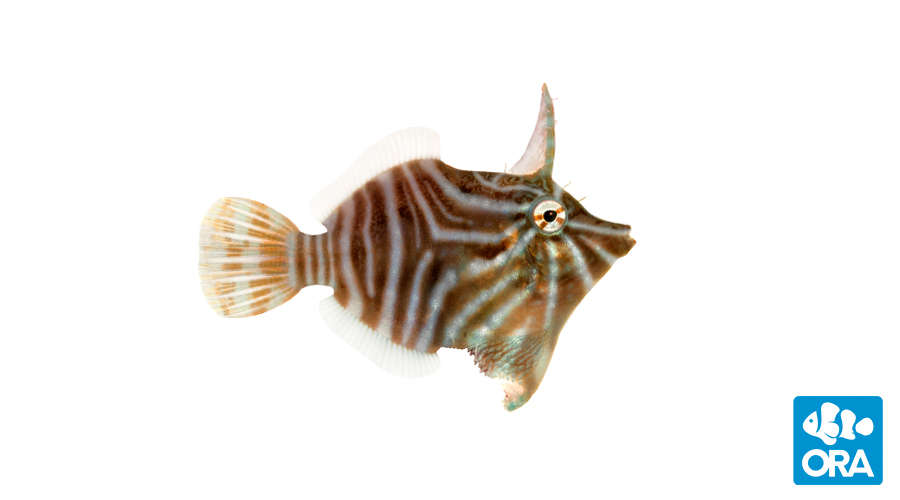 The ORA Radial Filefish or Radial Leatherjacket is an exceptional example of adaptation, camouflage and perhaps symbiosis all wrapped up in one nice little package. Radial Filefish make their home amongst the pulsing xenia in the wild and as you can see from their markings, they perfectly mimic the coloration and pattern of pulsing xenia.  Even through adulthood this color pattern remains intact.

Acreichthys radiatus can be found from the Northern coast of Australia, to the Ryukyu Islands in Japan, throughout Indonesia’s West and through to New Caledonia. In the aquarium, captive bred Radial Rilefish will accept mysis and your standard fare cuisine, marine pellet foods.  Some filefish are know for nipping and eating some soft and hard corals but ORA tells us that the Radial Filefish is safe for reef aquariums as they rarely bother corals in the aquarium.  Their nature towards other fish and aquarium inhabitants is peaceful and they reach a maximum size of about 3 inches in length.  The sex of the Radial is identified by a cluster of subtile bristles at the base of the males tale.  The bristles are absent in female Radial Filefish.  Like a mood ring from the 70’s, these little fish can rapidly change their color and pattern depending on their mood or surroundings.  These color and pattern shifts have been observed in ranges from cream to green and with and without stripes or blotches.  Keeping xenia is not required to care for this species and ORA has discovered that they are at home among the branches of other soft corals, Goniopora and even within the branches of stony corals like Acropora.

“The story of Adam and Eve”

Several years ago, two Radial Filefish were collected from a coral reef around Cebu in the Philippines. Shortly after, they were flown 7,340 miles across the entire Pacific Ocean to a marine wholesale facility in Los Angeles, California. Following a brief stay, these small fish were bagged, boxed and flown another 1,727 miles to Rhinelander, Wisconsin where they finally settled into the established 28 gallon reef aquarium of LiveAquaria’s own Kevin Kohen. They thrived there, eating three to four times a day, surrounded by a variety of Goniopora, Clavularia, Zoanthids and Mushrooms.

“They always preferred to stay close to the Clove Polyps as they are frequently found around Xenia sp. in the wild and Clavularia looks similar to that.” – Kevin Kohen

After a few years under the expert care of Kohen, their unique pattern and behavior piqued the interest of us here at ORA as we were just coming into success raising the Whitespotted Pygmy Filefish. So back into an airplane they went traveling another 1,353 miles to their new home at the ORA facility in tropical Florida.

After introducing these new filefish into our breeding program, we soon noticed how protective the females become of their nests. As we raised and experimented with our new juveniles, we were delighted to find them as reef safe as our ORA Whitespotted Filefish. However, care should be taken to observe them as they may casually nip at corals.

Radial Filefish are absolutely adorable to observe.  Freshly settled juveniles bite and hold on to algae on the sides of the tank when they sleep at night.  In a reef tank they become nearly invisible within the pulsing branches of xenia.  You don’t have to look too hard for them though, it is hard to miss their distinct striped pattern, constantly rotating eyes and curious nature. In the diving video below, you can see how their relationship with xenia is reminiscent to the symbiotic behavior of clownfish and anemones.