Trending
You are at:Home»News»Drugs We Dump May Be Causing Sex Changes in Fish 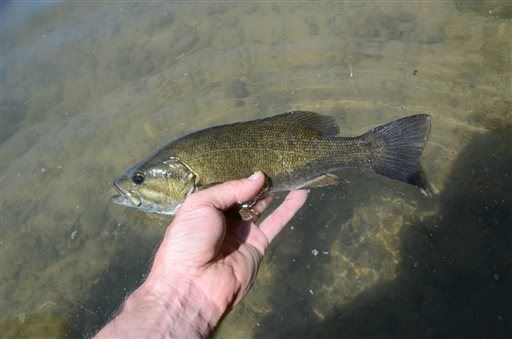 Male bass are experiencing unwanted sex changes, apparently thanks to the “chemical soups” that pass for waterways in the Northeast. The Washington Post reports 85% of male smallmouth bass surveyed in the region have “characteristics of the opposite sex”—specifically eggs where their testes should be. The same is true of 27% of area largemouth bass, Vice adds. For a recently published study, researchers tested bass near 19 wildlife refuges in the Northeast, according to a US Geological Survey press release. Researchers didn’t do a chemical analysis of the water where the intersex fish were found, so they can’t be sure specifically what is causing the sex changes. But they suspect the problem is things that get dumped down drains and into US waters.

Researchers believe the likely culprits are birth control pills, pesticides, hormones in livestock manure, and other chemical-heavy products, according to the press release. Vice reports those products contain estrogen, which can produce dramatic effects even at very low levels. But this isn’t just a problem in the Northeast. Up to 90% of male smallmouth bass in parts of West Virginia are intersex, and increasing sex changes have been noted in nearly 40 fish species around the world going back 20 years, according to the Post. Study author Luke Iwanowicz calls these fish “the canary in the coal mine.” “We are looking at fish but, of course, there is that concern that, if this stuff is in the water, it can be affecting other wildlife,” he tells Vice. (A hermaphrodite cat got gender assignment surgery this year.)

This article originally appeared on Newser: Drugs We Dump May Be Causing Sex Changes in Fish