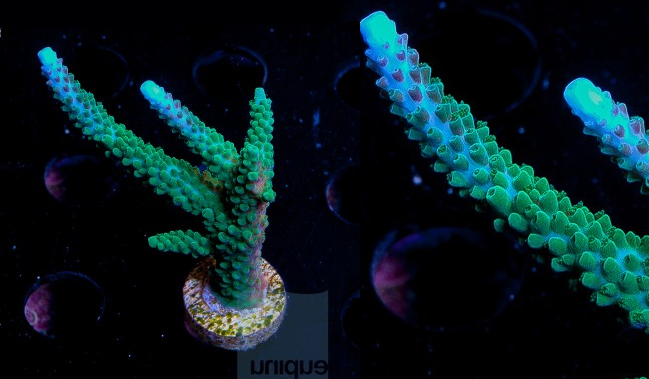 I have a special fondness for this week’s coral having originally collected a small colony from Bali about 12 or 13 years ago which ultimately grew to become a stunning specimen. At the time, the Acropora loisettae or Blue Tip Green Stag was rather hard to obtain which justified my pride in having collected this one.  Fragging it for many people over the years was a pleasure and I typically sold it for about $60.00 for a  1 – 2″ frag.  Despite harvesting frags from the colony, it still became the size of a basketball in just two years time. As Acropora loiettae has become more readily available it is more easily obtained and a 1.5″ frag can be purchased from Unique Corals for a mere $24.00.

A. loiettae is found throughout the Indo Pacific but most of the mother colonies are maricultured off of the coast of Bali.  In the wild, A. loiettae is commonly found in sheltered lagoons receiving protection from powerful, direct wave action.  In this environment, it forms large and strong tree-like colonies.  In the aquarium I observed the best growth and coloration under 20K radium bulbs (prior to LED invasion into the market).  Interestingly enough, Unique Corals still raises these corals under 20K 400 watt Radium metal halide bulbs and feeds them oyster eggs and other meaty marine based foods several times per week.  This specimen is more resilient to changes in water quality than many other acro species and for that reason I consider this to be a must have in aquariums of 90 gallons or more.  Its stunning, greenish-blue coloration is not often observed in many coral species.  Under appropriate conditions in your reef, you may expect your frag to grow into a large, open-branched colony with an interesting texture and contrasting ice blue growth tips.