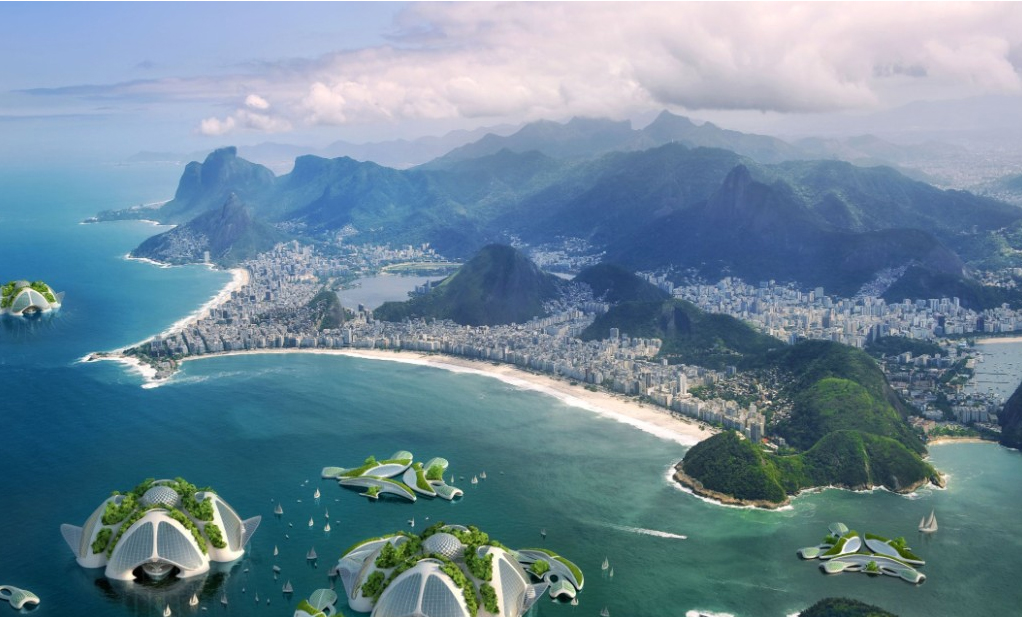 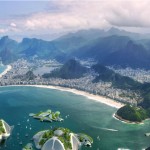 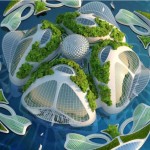 The village concept could house up to 20,000 people in the future 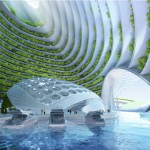 Those concerned about strong currents, storms, or even earthquakes, need not worry: the towers geometry and ballasting would counteract marine whirlpools and natural buoyancy. 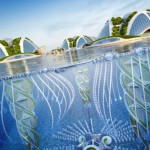 Jellyfish-like in appearance, each oceanscraper would be constructed using recycled plastics from the misleadingly named “Seventh Continent” , or great Pacific Garbage Patch 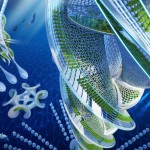 The submerged skyscrapers would reach to the sea floor mangrove-covered marinas on the surface of the world’s oceans. 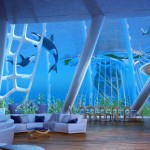 As well as living space, the Aequorea would house science labs, office space, hotels, sports fields, and farms across 250 floors and reach a depth of up to 1000 meters. 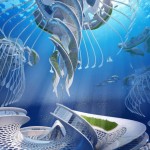 Sebastian the Jamaican red crab may have preached the virtues of living “Under the Sea” in Disney’s “The Little Mermaid,” but so far humans have failed to come round to the crustacean’s way of thinking.

Indeed, the future of human habitation, whether through choice or catastrophe, is often imagined (in popular culture at least) as being beyond Earth’s orbit. Sub-aquatic living still seems, perversely it could be argued, very alien.

Not so for Belgian architect Vincent Callebaut. He has revealed ambitious plans for a series of underwater eco-villages that could house up to 20,000 people each in the future. His Aequorea project imagines entirely self-sufficient, spiraling “oceanscrapers” reaching to the sea floor from mangrove-covered marinas on the surface of the world’s oceans. 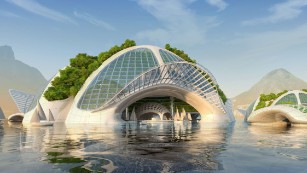 Jellyfish-like in appearance, each oceanscraper would be constructed using recycled plastics from the misleadingly named “Seventh Continent”, or Great Pacific Garbage Patch (much of the debris here is believed to be in the form of microplastics, rather than a visible mass).

As well as living space, the Aequorea would house science labs, offices, hotels, sports fields and farms across 250 floors and reach a depth of up to 1,000 meters (3,280 feet). Seawater would be desalinated for drinking, microalgae would recycle organic waste, and light would be provided through bioluminescence.

Those concerned about the unsettling effects of strong currents, storms, or even earthquakes, i.e. everybody, need not worry: the towers’ geometry and ballasting would counteract marine whirlpools and natural buoyancy, while the thickness of the outer shell would increase “from the sea surface downwards, to compensate for the strain caused by the increase in pressure.”

So far, so utopian of course, and one suspects the research and development stage this project is currently in may outlast many of us. However, humans are already living underwater for short periods in a research capacity at the Aquarius Reef Base off the Florida Keys.

Plus, there are a handful of unique sub-aquatic luxury leisure experiences available currently, for example, at the Ithaa Undersea Restaurant at the Conrad Hilton in the Maldives, where patrons can dine, wed, or even sleep inside a transparent acrylic chamber five meters (16 feet) below the surface of the Indian Ocean. Also, currently under construction is the Water Discs Underwater Hotel, in Dubai, which will consist of 21 sub-aquatic rooms surrounded by bustling coral reef.

Just off the coast of Cancun, Mexico, sits the world’s first underwater museum, the Museo Subaquàtico de Arte, which not only exists as a unique cultural attraction featuring numerous contemporary sculptures, but also provides a habitat for wildlife while simultaneously drawing divers away from a nearby coral reef, helping to prevent further damage to the delicate ecosystem. 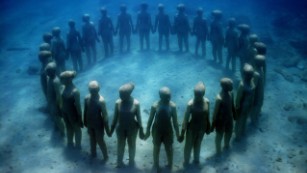 A muted $150 million underwater museum in the bay of Alexandria, Egypt, by French architect Jacques Rougerie sounds similarly enchanting, with the added benefit — for some — of being able to remain bone dry. Visitors will gaze upon over 2,500 sunken stone artifacts, including the ruins of the famous Pharos lighthouse, from viewing platforms sitting nearly seven meters below the surface of the Mediterranean, reached through long fiberglass tunnels — visibility permitting.

So, though we may not be living the life aquatic just yet, we can certainly dip our toes in the water to see whether it really is better, as Sebastian suggested, under the sea.