Penguins of Cape Denison in Antarctica effectively trapped by iceberg the size of Rome and face 120km round trip to feed.

An estimated 150,000 Adelie penguins living in Antarctica have died after an iceberg the size of Rome became grounded near their colony, forcing them to trek 60km to the sea for food.

The penguins of Cape Denison in Commonwealth Bay used to live close to a large body of open water. However, in 2010 a colossal iceberg measuring 2,900 square kilometres became trapped in the bay, rendering the colony effectively landlocked. 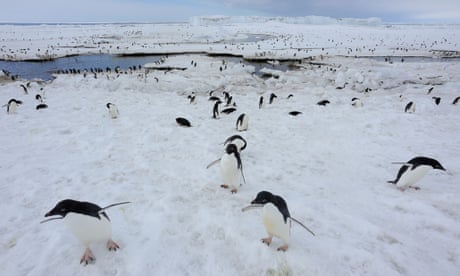 Penguins seeking food must now waddle 60km to the coast to fish. Over the years, the arduous journey has had a devastating effect on the size of the colony.

Since 2011 the colony of 160,000 penguins has shrunk to just 10,000, according to research carried out by the Climate Change Research Centre at Australia’s University of New South Wales. Scientists predict the colony will be gone in 20 years unless the sea ice breaks up or the giant iceberg, dubbed B09B, is dislodged.

Penguins have been recorded in the area for more than 100 years. But the outlook for the penguins remaining at Cape Denison is dire.

“The arrival of iceberg B09B in Commonwealth Bay, East Antarctica, and subsequent fast ice expansion has dramatically increased the distance Adélie penguins breeding at Cape Denison must travel in search of food,” said theresearchers in an article in Antarctic Science.

“This has provided a natural experiment to investigate the impact of iceberg stranding events and sea ice expansion along the East Antarctic coast.”

In contrast, a colony located just 8km from the coast of Commonwealth Bay is thriving, the researchers said.

The iceberg had apparently been floating close to the coast for 20 years before crashing into a glacier and becoming stuck.