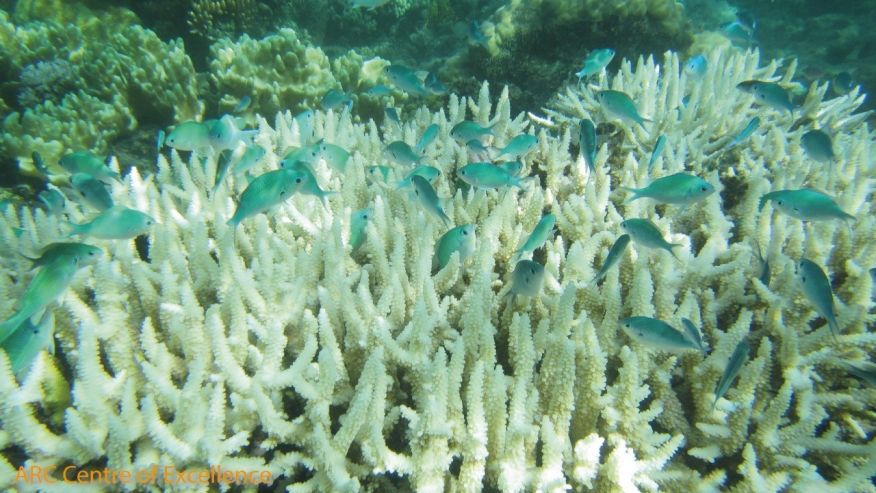 Australia’s Great Barrier Reef has been hit by widespread coral bleaching, which has the potential to be devastating to one of the world’s most iconic natural wonders.

Battered by record warming on land and sea the past two years, coral reefs around the world have suffered bleaching events. When that happens, corals expel the symbiotic algae living in their tissues, causing corals to turn white or pale. Without the algae, the coral loses its major source of food and is more susceptible to disease.

Starting in the North Pacific Ocean in the summer 2014, the bleaching expanded to the South Pacific Ocean, Indian Ocean, and Atlantic Ocean in 2015. That prompted NOAA’s Coral Reef Watch in October to declare the third ever global bleaching event – after the 1997-1999 and 2010 events.

Related: NOAA: Coral bleaching has gone global for the third time ever

Now, the bleaching brought on by a combination of El Nino and climate change has reached one of the world’s largest reef networks – one that comprises over 3,000 reefs and coral cays and has been designated one of the seven wonders of the world.

“I witnessed a sight underwater that no marine biologist, and no person with a love and appreciation for the natural world for that matter, wants to see,” said Jodie Rummer, a senior research fellow at the ARC Centre of Excellence for Coral Reef Studies, who has just returned from more than a month at Lizard Island Research Station in the Northern Great Barrier Reef.

“The bleaching now is not just restricted to the hard corals. There’s also extensive bleaching in the soft corals, and it is also affecting anemones and giant clams,” she said in a statement.

Rummer called the bleaching “catastrophic” and admitted she is worried about the future for the reef and those that depend on it like fish and other marine life.

“We know that many of these tropical populations of reef fishes cannot tolerate dramatic increases in temperatures for extended periods of time. So it may be just a matter of time before the fish start feeling the heat as well,” she said. “We’re watching them closely.”

Related: El Nino is taking a toll on the world’s coral reefs

Terry Hughes, convenor of Australia’s National Coral Bleaching Taskforce, took part in an aerial survey of 500 coral reefs from Cairns to Papua New Guinea and came away with much the same concerns about the bleaching on the Great Barrier Reef.

“This has been the saddest research trip of my life,” Hughes said in a statement. “Almost without exception, every reef we flew across showed consistently high levels of bleaching, from the reef slope right up onto the top of the reef. We flew for 4000 kilometers (2,485 miles) in the most pristine parts of the Great Barrier Reef and saw only four reefs that had no bleaching. The severity is much greater than in earlier bleaching events in 2002 or 1998.”

According to NOAA, Australia saw warmer than average temperatures in February and local forecasts are predicting the warming trend to continue.

“This year, the combination of El Niño, climate change, and an extended period of hot summer days when the tide was exceptionally low has caused many of the corals that survived last year’s cyclone to lose their symbiotic algae and start bleaching,” Rummer said.

Related: 2015 was hottest year ever, with records set around the globe

In response to the surveys that found 50 percent mortality on some reefs, Great Reef Marine Park Authority has lifted its response to level 3, which would indicate severe bleaching. But authorities also held out hope that recent rains and cloudy conditions could spare some reefs from the ravages of the bleaching.

“We now need to see if local weather conditions over the next few weeks are favorable enough to prevent further bleaching and to help these reefs recover from the minor to moderate bleaching that we’re continuing to see south of Cooktown,” he said in a statement. “We still have many more reefs to survey to gauge the full impact of bleaching, however unfortunately, the further north we go from Cooktown, the more coral mortality we’re finding.”