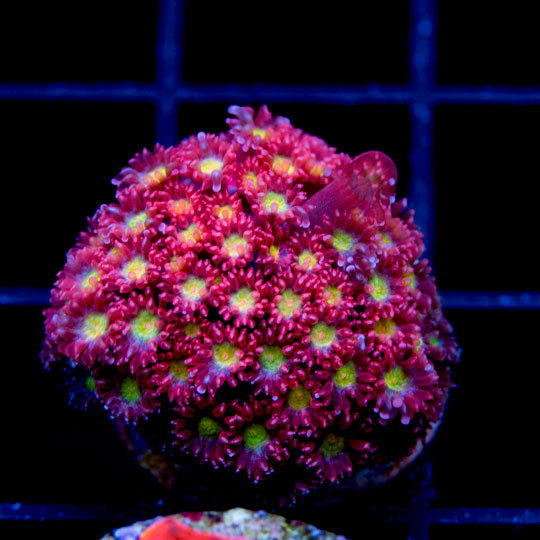 When opened up these corals look similar to a bouquet of flowers.  Not considered to be overly aggressive towards other corals they can still sting neighboring corals within close proximity as their polyps can extend well beyond their coral skeleton base.  Joe’s Passionfruit Goni is of exceptional color and contrast and this why we have featured this WYSIWYG coral as the AquaNerd Featured Coral of the Week.

Goniopora corals come in a wide range of colors and species and the genus contains the following species:

Being a somewhat difficult coral to care for, Goniopora corals require moderate lighting combined with moderate water movement within the aquarium.  Goniopora are strong feeders and susceptible to death from nutritional deficiencies.  For long term success, they require calcium, strontium, magnesium, and other trace element.  Flowerpot corals also require supplemental foods high in Iron and manganese.  There are different ways to feed Goniopora. For example, they can be target fed with a syringe while the aquarium pumps are temporarily turned off or food can be dispersed in the water column where the Goniopora will feed on its own. When possible, direct feeding works best because more of the food will reach the intended polyps. Alternately, plankton can be placed in the tank with all filtration systems off so the food does not get swept away. The filters should be turned back on after one to two hours to keep the tank clean and livable for all of the creatures.  One of our sponsors, Two Little Fishies makes a coral food called Goniopower that was developed by developed by Justin Credabel for feeding Goniopora and Alveopora, and other suspension feeding marine invertebrates such as sea fans, feather dusters and more.