Trending
You are at:Home»News»Drone captures amazing footage of false killer whales hunting down a shark in Australia 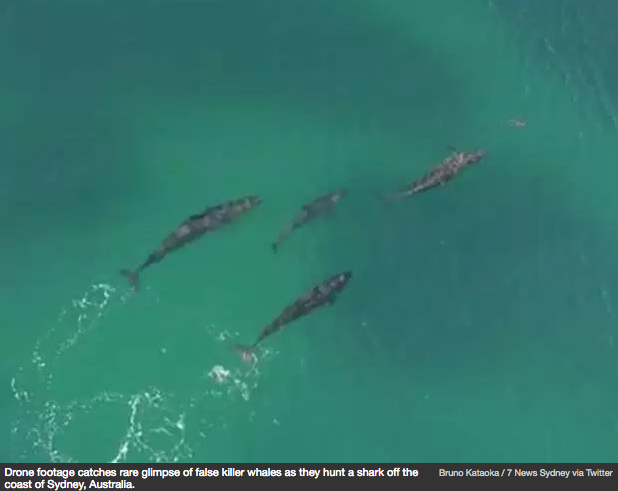 A drone hobbyist in the waters off the coast of Australia has captured footage of a pod of false killer whales chasing and killing a juvenile shark.  As you can see from the video the shark, typically considered to be an apex predator, didn’t stand a chance against the “wolf pack”.

When an amateur drone hobbyist in Australia took his remote-controlled aircraft to the skies, he didn’t expect to see anything like this. The video shows a pod of false killer whales, a type of dolphin, chasing down a juvenile shark in crystal clear water.

The aerial footage taken off the coast of Cronulla, a Sydney suburb, offers a glimpse into the behavior and feeding behavior of false killer whales.  Rarely seen in the wild, let alone caught on film, this footage gives us some insight into how the animals work together to hunt down prey.

“We did not expect to see what we saw. It was exciting, it was a really exciting moment,” Bruno Kataoka, who was operating the drone, told 7 News Sydney. “National Geographic guys waiting months to get such a thing, and we just happened to be there at the right moment, at the right time.”

The shark-chase ends when one of the four false killer whales grabs it’s prey and with a swift graband emerges moments later with the shark in its jaws.

Sharks have very few natural enemies. However, they do occasionally fall prey to orcas, a member of the dolphin family.  Species of dolphins which paralyze them by flipping them upside down or ramming them so hard that they become incapacitated.  From Kataoka’s footage of the false killer whales, it’s not possible to identify the species of shark that was dispatched.

Georgina Wood, a marine biologist from Fantasea Cruising Sydney, said: “Oh it’s amazing, that kind of footage is just so rare to catch.”

False killer whales are like their namesake, the orca or killer whale, in that they are part of the dolphin family. In size, orcas are the largest oceanic dolphin, whereas false killer whales are the third largest.  False Killer’s are typically found in pods of 10 to 20 members and sometimes as many as 100 can be seen together.  Typically they feed on fish, squid and octopi.