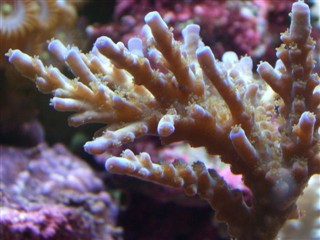 This weeks featured coral of the week comes from yours truly, Scott Groseclose, and it’s called the Acropora kirstyae – AKA the “nub”.

Back in 1992 when I was moving from Charlotte, NC to Columbia, SC, I discovered the “nub”, likely one of only a handful of Acropora corals to be purchased from an aquarium store in the US at that time.

The first acro I ever had, came in by accident from a retail store in Charlotte, NC, formerly known as Inland Oceans.  At the time, I considered it to be my favorite place to go. I loved seeing their beautiful display tanks and wide selection of exotic fish and corals.  On this particular visit, I saw a nice double head colony of bright yellow leather coral (Sarcophyton elegans).  Upon closer inspection through the glass, I noticed something rather odd.  In between the two heads was a tiny little “nub” of what looked like a stony coral of some type.  It was only one solitary polyp that I had never seen in an aquarium store before.  It was so small at first I wasn’t sure what it was so I asked Tim, the owner, if he thought it was an Acroporo species. He didn’t know and didn’t seem to care about that much it so I asked him how much the yellow leather corals were. He said it was $130.00 but that the then owner of the Charlotte Hornets was going to come by later that day and purchase it for his restaurant aquarium.  So, I asked Tim if I could buy it and he said “Sure, He hasn’t paid for it yet.”  Not wanting to let this possibility go, I shelled out the money (the most money I had ever spent at that point for one coral colony) and took it hope, hoping that I could keep the “nub” alive. I had high hopes that it would one day become what I thought it would be.

The nub grew into a fast growing colony.  Later, around 1994 or 1995, I began fragging and selling the frags to stores around the Carolinas for several years before eventually loosing it due to a faulty circuit breaker while on vacation.  I’m not 100% positive what species of acro it was, but I’m almost certain it was Acropora kirstyae because I couldn’t find anything else that it looked like in Veron’s Volume 1 Book, Corals of Australia and the Indo-Pacific.