Trending
You are at:Home»News»Rare eyeless catfish found in U.S. for first time in a Texas cave 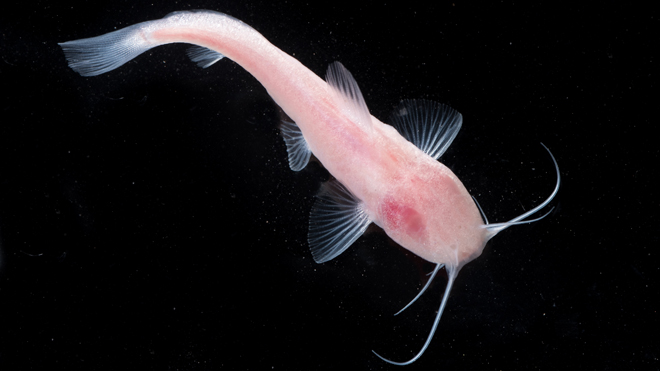 Researchers in Texas have discovered an extremely rare, eyeless catfish once thought only to exist in Mexico.

A pair of the endangered Mexican blindcat (Prietella phreatophila) was discovered in the depths of a limestone cave at Amistad National Recreation Area near Del Rio, Texas. The pair has since been moved to the San Antonio Zoo.

“Since the 1960s, there have been rumors of sightings of blind, white catfishes in that area, but this is the first confirmation,” Dean Hendrickson, curator of ichthyology at the University of Texas at Austin, said in a press release

. “I’ve seen more of these things than anybody, and these specimens look just like the ones from Mexico.”

The Mexican blindcat is a species that grows no more than 3 inches in length and is known to inhabit the areas around the Edwards-Trinity Aquifer, which lays beneath the Rio Grande basin in Texas and the Mexican state of Coahuila. Besides being the first sighting of the fish in Texas, the discovery also gives credence to the belief that water-filled caves below the Rio Grande may connect Texas and Mexico.

“Aquifer systems like the one that supports this rare fish are also the lifeblood of human populations and face threats from contamination and over-pumping of groundwater,” Jack Johnson, a National Park Service resource manager at Amistad, said in the same release. “The health of rare and endangered species like this fish at Amistad can help indicate the overall health of the aquifer and water resources upon which many people depend.”

For years, Hendrickson led efforts to find the species in the U.S., but was only able to locate it in Mexico.

The discovery of the Mexican blindcats brings the total number of blind catfish species in the U.S. to three, with the toothless blindcat (Trogloglanis pattersoni) and the widemouth blindcat (Satan eurystomus), residing in the Edwards Aquifer below the city of San Antonio.

The Mexican blindcats found in Texas will be housed in a special facility designed to accommodate cave and aquifer species at the San Antonio Zoo’s Department of Conservation and Research.

“The San Antonio Zoo has a series of labs specially designed to keep subterranean wildlife safe and healthy,” said Danté Fenolio, vice president of conservation and research at the San Antonio Zoo. “The fact that the zoo can participate now and house these very special catfish demonstrates the zoo’s commitment to the conservation of creatures that live in groundwater.”