Trending
You are at:Home»News»Ghostly Fish Species Seen Alive In NOAA Video For The First Time ** 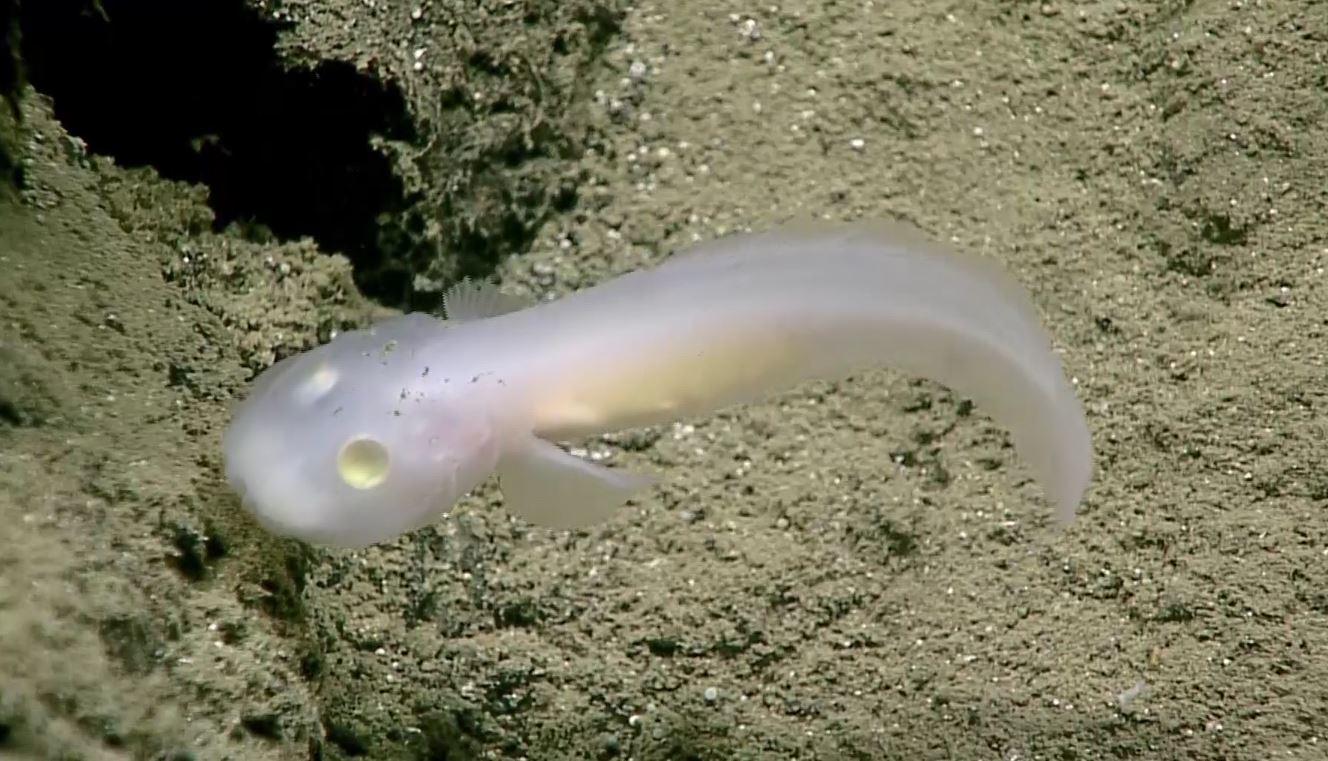 This fish, in the little-known family Aphyonidae, was found by a team aboard the NOAA ship Okeanos Explorer at a depth of 2,500 meters (8,200 feet) in the Marianas Trench.
NOAA OKEANOS EXPLORER

On July 10th, NOAA Scientists completed an exploration expedition into the deepest U.S. territorial waters in an area known as the Marianas Trench.  The trench is about 1,580 miles (2,550 kilometers) in length with an average width of 43 miles (69 kilometers).  The maximum verified depth is 6.831 miles at a small slot-shaped valley in its floor known as the Challenger Deep, at its southern end.  To explore these great depths under extreme atmospheric pressure requires special equipment and considerable funding.

The expedition was performed with a vessel owned by the National Oceanic and Atmospheric Administration as they explored the depths of the Marianas Trench Marine National Monument, north of Guam in the western Pacific.  Scientists searched the depths to gain a better understanding of the biology, geology, topography and potential mineral deposits.

In late June, the team happened upon a ghostly fish that had never been observed alive before. Its existence was only know from dead specimens found in decades past by samples collected from the ocean floor.

“Scientists say they were thrilled, but shocked, to view the mysterious creature, which is in the little-known family Aphyonidae.”

“Some of us working with fish have had wish lists, bucket lists, for what we might want to see,” says Bruce Mundy, a NOAA fisheries biologist with the Pacific Islands Fisheries Science Center, “A fish in this family is probably first on those lists for a lot of us.”

The fish has no scales, underdeveloped eyes, and exhibits a white gelatinous, somewhat translucent skin that lacks pigment. Scientists stated in an NOAA release that the animal is in the same taxonomic order as cusk eels, serpent-like fish that inhabit very deep waters.

The researchers aboard the Okeanos Explorer found the fish at a depth of 8,200 feet (2,500 meters). Their vessel also mapped and inspected the seafloor that is part of the Commonwealth of the Northern Mariana Islands. Nearly one-half of the United States territory is underwater and most hasn’t been explored, says Bob Ballard, an oceanographer and the discoverer of the wreckage of the Titanic.

Though this expedition was completed on July 10th there is another one that will soon be underway beginning July 27, 2016 as they embark on the Deepwater Wonders of Wake: Exploring the Pacific Remote Islands Marine National Monument expedition.  You can watch the exploration live online once it’s underway.