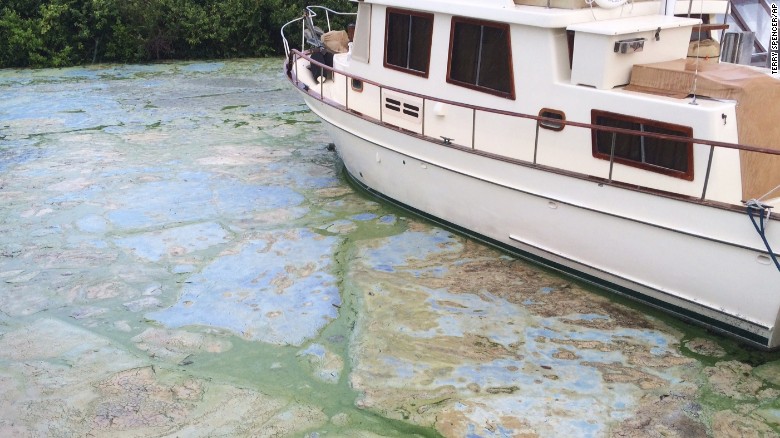 Jordan Schwartz, owner of the Ohana Surf Shop, said he wanted to cry when he saw the green slime — a toxic algae bloom — covering his swath of Stuart Beach on Florida’s east coast.

“Animals are in distress, some are dying, the smell is horrible,” he told CNN on Friday. “You have to wear a mask in the marina and the river. It’s heartbreaking and there is no end in sight.”
The economic impact is devastating, he said.
“This town is 100% driven by tourism but the tourism is empty,” he said. “You go to the beach and it’s the height of summer and we have empty beaches, empty restaurants, empty hotels.”
Gov. Rick Scott,declared a state of emergency midweek in Martin, St. Lucie, Lee and Palm Beach counties because of the toxic algae bloom that originated in Lake Okeechobee and spread to the beaches.
Algae-covered water at Stuart’s Central Marine boat docks.
The Army Corps of Engineers released nutrient-heavy water into the St. Lucie Estuary as part of their flood control measures, Corps spokesman John Campbell told CNN. The algae outbreak eventually reached the beaches.
To make matters worse, a massive algae bloom was already covering the lake. Following the emergency declaration, the Corps announced it would cut discharges by about a third beginning Friday.
“The algae outbreaks are triggered by fertilizer sewage and manure pollution that the state has failed to properly regulate. It’s like adding miracle grow to the water and it triggers massive algae outbreaks,” Earthjustice spokeswoman Alisa Coe told CNN.
Earthjustice, a nonprofit environmental law organization, has been fighting for tougher pollution limits in the state.
“We’ve seen this for years and years and instead of addressing the problem, here we are on the Fourth of July weekend with a state of emergency being declared,” Coe said. “Usually folks would be out fishing, swimming and enjoying the beach with their families. Instead, they are left with water that is too toxic to touch.”
Toxic blooms can affect the gastrointestinal system, liver, nervous system and skin, according to the Florida Department of Environmental Protection.
The hazardous water is costing Schwartz’s family owned business about $10,000 a week. They even had to cancel their surf camp for kids, one of their main streams of income.
“We are afraid to put our kids or our camp teachers in the water,” Schwartz said.
In a press release, Scott placed blame not on pollutants but on water storage limitations.
“Florida’s waterways, wildlife and families have been severely impacted by the inaction and negligence of the federal government not making the needed repairs to the Herbert Hoover Dike and Florida can no longer afford to wait,” Scott said.
Earth justice’s Coe said storage projects won’t fix the real problem.
“The State wants to pretend the problem is only about water storage but it’s also a pollution issue,” Coe said. “In order to really get at the problem you got to clean up the water. Anyone whose been watching the state of regulation in Florida saw this coming.”
Campbell agreed.
“The storage would help as would additional conveyance but it’s a problem with both quantity and quality,” he said.
While the Army Corps of Engineers must watch over water levels in the lake, it does not monitor water quality.
“The State of Florida is responsible,” said Campbell, adding that the Corps knows it is releasing heavily polluted water into the estuary.
Part of the problem, Campbell explained, is that Lake Okeechobee’s dike is susceptible to seepage and erosion and water levels are already at a 10- year high.
“The lake could rise another 5 feet during the wet season,” said Campbell. “The Corps doesn’t want the water to get too high in the interest of public safety.”
For his part, Schwartz is hoping his business of 10 years will survive the state and federal back and forth.
“We are used to seeing our rivers continually being polluted year after year but we have never seen our beaches polluted. What we are witnessing right now, it’s the tip of the iceberg,” he said.
Original article posted on CNN.
Share. Twitter Facebook Google+ Pinterest LinkedIn Tumblr Email