The deep blue hole called the “Dragon Hole” or “The Eye” by locals has set a new record for the deepest blue hole in the world.  According to Xinhua News, the Dragon Hole is 987 feet (300.89 meters) deep.  Researchers who have spent the past year exploring  and using an underwater robot, were able to determine the depth of the blue hole.
Researchers found more than 20 species of fish in the upper part of the sinkhole but below 100 meters the water is oxygen-free or nearly oxygen free.  Therefore it’s unlikely there is any life much beyond the 100 meter mark. 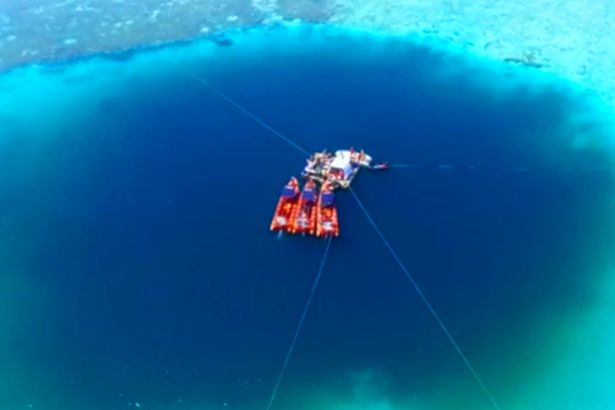 The most well known and recognized blue hole, the Great Blue Hole of Belize is 300 meters across and 124 meters deep and the deepest sinkhole prior the Dragon Hole discovery; Dean’s Blue Hole in the Bahamas is about 660 feet deep.

A blue hole is a large sinkhole or cave system in the ocean that is visible from the surface and they were formed during past ice ages, when sea levels were as much as 330–390 ft lower than were they are presently.  At those times, these formations were created by erosion from rain and chemical weathering common in limestone rock.  As the oceans rose erosion ceased as these holes and cave systems became submerged.Most blue holes contain freshwater and saltwater.

The Dragon Hole is located in a coral reef off the Paracel Islands.  The Sansha city government in Hainan Province, China, said it has drafted measures to protect and study the blue hole in the South China Sea.
Share. Twitter Facebook Google+ Pinterest LinkedIn Tumblr Email