The Montipora Family contains about 19 different species but our featured coral of the week focuses on the encrusting purple Montipora nodosa. 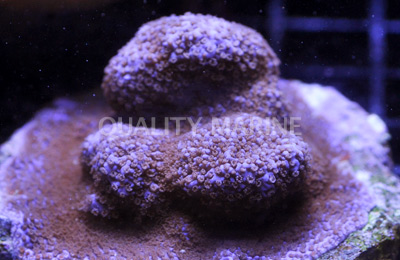 This unique Montipora will easily encrust on rock work or frag mounts.  It is a relatively fast growing coral and it is considered to be easy – moderately-easy to care for in a reef aquarium.  Encrusting Montipora Coral is classified by aquarists as a small polyp stony (SPS) coral often referred to as Cabbage, Lettuce or Velvet Rock Coral. It’s a relatively fast growing coral, and under the right conditions will spread and encrust on just about any substrate in the aquarium including the aquarium glass, given the chance. The coral polyps are very small and the calices are less than 2mm in diameter with the polyps giving it a velvety appearance when they on display.

Montipora nodosa is relatively peaceful and can be placed in close proximity to other similar peaceful corals in the reef aquarium. It is also relatively easy to maintain, but it is recommended that you should keep this coral in a well established reef aquarium for the best chance of survivability. This coral requires medium to high lighting combined with medium water movement in the aquarium.  For continued good health and growth, these corals require the addition of calcium, strontium, magnesium and other trace elements.  These corals will also benefit from additional micro-plankton foods designed for filter feeding inverts.