Trending
You are at:Home»News»Mama Dolphins Sing Their Name to Babies in the Womb 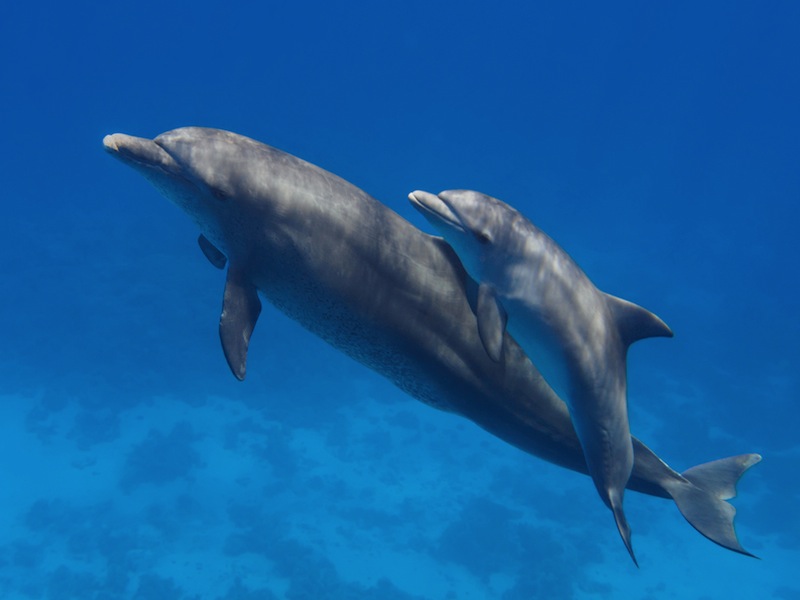 DENVER — Humans aren’t the only species whose members speak to their babies in the womb. Dolphin mamas appear to sing their own name to their unborn calves.

New research suggests that dolphin mothers teach their babies a “signature whistle” right before birth and in the two weeks after. Signature whistles are sounds that are made by individual dolphins, which the animals use to identify one another. Calves eventually develop their own signature whistle, but in the first few weeks of life, mothers seem focused on teaching their offspring their signature sound, the scientists said.

“It’s been hypothesized that this is part of an imprinting process,” Audra Ames, a doctoral student at the University of Southern Mississippi, said here on Friday (Aug. 5) at the annual meeting of the American Psychological Association. [Deep Divers: A Dolphin Gallery]

Earlier studies had shown that mother dolphins start whistling their signature whistle much more in the days before birth, and then in the calf’s first two weeks of life, Ames told Live Science. There are multiple theories about why, including that perhaps moms are trying to get babies to develop their own signature sound.

But no one had studied signature-whistle rates not only before and after birth, but also in the same dolphin mother, Ames said. She and her colleagues had the opportunity to do that in late 2012 and early 2014, when a baby dolphin named Mira was born to a 9-year-old mother at Six Flags Discovery Kingdom in Vallejo, California.

The researchers captured a total of 80 hours of recordings from the two months before and the two months after the dolphin’s birth. They recorded the mom and the calf as well as the five dolphins housed with them. It was important to capture the noises of the mother’s peers to understand whether the communication was exclusive to the mother-baby pair, Ames said.

The recordings showed that the increased signature-whistle production was, in fact, the purview of the mother dolphin. She began increasing her signature whistle two weeks before the birth, possibly starting the learning process while her calf was still in utero.

A seemingly related phenomenon has been observed during human pregnancies, according to Ames. “We actually do see that human babies develop a preference for their mother’s voice in the last trimester,” she said. “We don’t know if that’s something that’s going on here, but it could be something similar.” [Photos: World’s Cutest Baby Wild Animals]

The mother dolphin also produced her signature whistle at high rates until two weeks after the calf’s birth, after which she tapered off. Interestingly, Ames said, the other dolphins in the group didn’t produce their own signature whistle at very high rates during the first two weeks of the calf’s life. But after mama stopped the repetitions of her own whistle, the other members of the group started producing their own whistle at higher rates.

“What the other dolphins might be doing here is remaining quiet so the calf does not imprint on the wrong signature whistle,” Ames said.

Baby dolphins don’t usually develop their own signature whistle until they’re around the age of 2 months, with much variation in timing, Ames said. The baby’s whistle tends not to be similar to the mother’s or to the other dolphins in the group.

“You don’t want to have a signature sound that is going to be similar to someone else you’re around quite often,” Ames said.

Ames and her colleagues are now studying other sounds in the mother-calf repertoire of communication, and they’re studying other marine mammals such as beluga whales as well as dolphins.