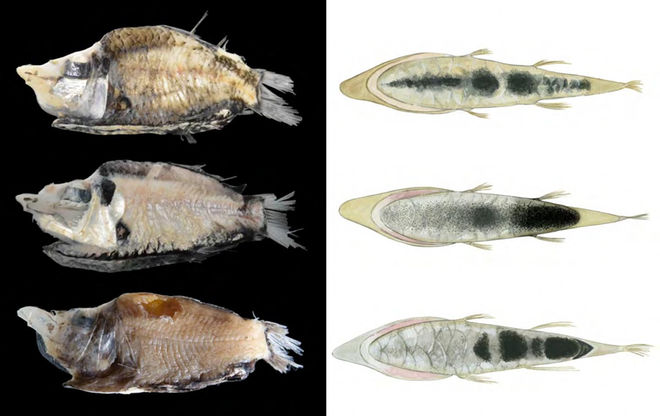 With distinct tubular eyes and a natural glow, two species of bioluminescent deep-sea fish nicknamed “barreleyes” have been identified.

The newly described species are part of the family Opisthoproctidae. Barreleye fish are not well-described, due to the rareness and fragility of specimens, the researchers said.

These fish are “one of the most peculiar and unknown fish groups in the deep-sea pelagic realm, with only 19 morphologically disparate species,” the scientists wrote in their new study.

However, the scientists were able to determine the two newfound species through comparisons of pigment patterns on the fish’s “sole.” This organ, found along the belly of some bioluminescent species, controls the light emitted from a different, internal organ. These two organs give the fish their glowing properties.

“The entire external surface of the sole is covered with large, thin scales showing gradually increasing pigmentation toward the distal parts, thereby functioning as a light screen when the reflector is contracted (no light emission) or expanded (light passes through the thin, transparent parts of the scales),” the researchers wrote in the study.

The fish scales’ pigment patterns show variation among species. The researchers took four specimens of a sole-bearing barreleye caught during recent research cruises near American Samoa and New Zealand and compared them to long-preserved specimens caught near the mid-Atlantic ridge and Australia. In doing so, the scientists found three different pigment patterns, suggesting three distinct species.

Differences in mitochondrial DNA, the genetic material of the structure within cells that generates energy,supported this conclusion. This revealed that two of the specimen were, in fact, two previously unknown species in the resurrected genus Monacoa — a formerly removed genus name because only two sole-bearing fish were known, rendering the distinction trivial. The newfound species, M. niger and M. griseus, are found only in the Pacific, whereas the previously known species can be found only in the Atlantic, according to the study.

The researchers suggested that the light emitted via the sole may be used as a communication system, as well as for camouflage when the fish are in waters where sunlight penetrates.

“This new study on the deep sea has shown unknown biodiversity in a group of fishes previously considered teratological [abnormal]variations of other species,” Jan Poulsen, lead author of the study, said in a statement. “The different species of mirrorbelly-tube eyes can only be distinguished on pigmentation patterns that also constitute a newly discovered communication system in deep-sea fishes.”

The new findings were published Aug. 10 in the open-access journal PLOS ONE.