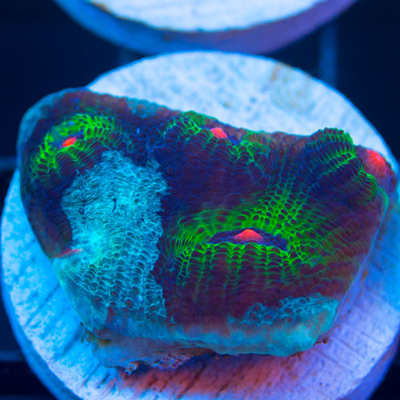 Now that we are back from our break, it’s time to introduce our featured Coral of the Week! This weeks coral, which comes to us from Joe Knows Reefs, is a beautiful Hieroglyph Chalice.  I had the pleasure of stopping by Joey’s place in Charleston, SC two weeks ago and this was one of the corals I purchased while visiting his store.

The Hieroglyph Chalice is a Mycedium sp. and like many chalice corals, this coral does not require high light or intense flow in the aquarium.  For the best coloration, we recommend placing this coral in the middle to deepest part of the aquarium with light to moderate water flow.  Mycedium can be recognized by observing the polyps.  These corals always have outward facing polyps that point toward the edge of the colony and commonly grow into a cup shape, hence the common name of Cup Coral.  Cup corals eyes often are contrasting in color to the body of the coral and some are very striking as is the case with Joey’s Hieroglyph Chalice.

As mentioned above, Chalice corals typically prefer lower light levels but they can sometimes adapt to more intense lighting but this should be done carefully over time and not done too drastically.  LED lighting in particular can stress Chalice corals if the lighting is too intense.  For the best chance of success, we recommend placing these corals in an area of the tank where the PAR level is close to 80.  Also, these corals tend to prefer light in the 15K to 20K range for most of the light cycle.

These corals do not require feeding, but as their morphology suggests, these corals will take small meaty foods and they can be target fed at night when their sweeper tentacles are on display.  Taking a little extra effort to feed these corals will accelerate the growth rate.

As is the case with all stony corals, addition of calcium, alkalinity and magnesium is essential for coral health and growth.

The bright contrasting red “eyes” have look beautiful against the neon green, deep blue and almost white coloration in this chalice.  A few years back I had a similar chalice that we purchased from Fishy Business in Columbia, SC called the Blue Ghost.  The Blue Ghost was almost identical but it lacked the red eyes seen in Joey’s Hieroglyph Chalice.  Also similar was another coral that we featured back in May of 2016 called the GB Avatar Chalice.  Both chalices are fast growers and the species are likely the same with color variations.  Joey currently has 2 of these frags available and they are on sale for $49.99.