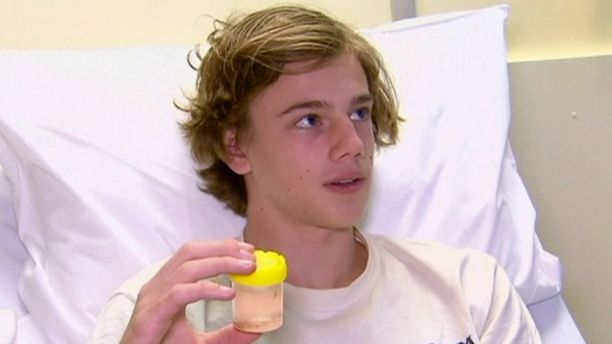 An Australian teenager who went for a swim Saturday and came out of the water with his feet and lower legs covered in blood says tiny marine creatures are to blame.

Sam Kanizay, speaking from a hospital bed, told local media he went waist-deep into the ocean at Brighton Beach in Melbourne after playing soccer, and emerged 30 minutes later to find his knee and ankles bleeding profusely. 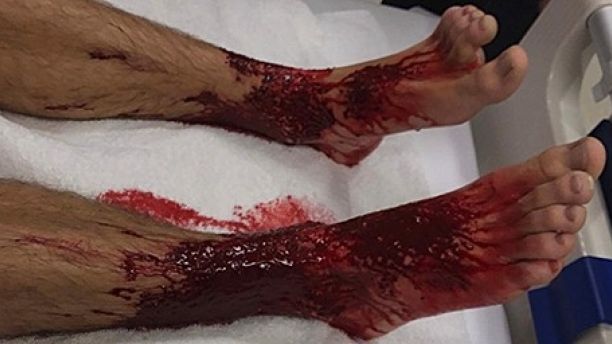 “I walked out of the water, saw what I thought was sand covering my ankles and lower calf so I just shook it off quite violently, and it came off and by the time I walked across the sand, about 20 meters to put my thongs on, I looked down and noticed that I had blood all over my ankles and feet,” Kanizay said.

The 16-year-old said his ankles were covered in what looked like hundreds of little pin holes.

“I didn’t really know what to think of it,” he said. “It was a bit of a shock and a bit of a random thing to see.”

When he went home, Kanizay tried to wash off the blood, but the bleeding did not stop. His parents then took him to the hospital.

“It kept bleeding for quite a while and it’s still oozing out now, but yeah, it just wouldn’t stop when we were hosing it down, so we decided to go to the hospital,” he said.

Kanizay’s father, Jarrod, said hospital staff had no idea what kind of creature could have caused the injuries. He went back to the beach the following night with a pool net full of meat, and captured the animals he believes could have been responsible.

“We had a few people guessing that it was sea lice, but no one really had any ideas,” he said.

Sam’s father then took a video of dozens of the tiny bug-like creatures chomping on the chunks of meat.

“What is really clear is these little things really love meat,” he added.

The 16-year-old was still hospitalized on Monday, but had been taken off antibiotics.

Jeff Weir, from the Dolphin Research Institute, said the likely culprit was probably opportunistic amphipods, tiny crustaceans that latch onto decaying plant or animal matter to help break it down, Sky News reported.

“They are not there to eat us, but sometimes they might take a little bit, like mosquitoes and leeches and other things out there in the environment,” he said.

But Thomas Cribb, a parasite expert from the University of Queensland, said it would be very unusual for amphipods to cause such extensive bleeding.

“It’s not a parasite I’ve ever come across,” he said.

Marine expert Michael Brown told Australia’s Channel Seven’s Sunrise program that he believes the small bugs eating the meat in the video could be jellyfish larvae.