Trending
You are at:Home»General»Hiding Your Overflow Boxes

The typical saltwater aquarium has an overflow box located along the back wall of the tank, typically in or near the corners. The overflow functions by not only hiding the associated plumbing, but it also helps skim the surface of the water where proteins and other unsightly things buildup due to surface tension. Despite the fact that these overflow boxes are a tremendous help to saltwater aquarium keepers, they can greatly take away from the look of the aquarium. 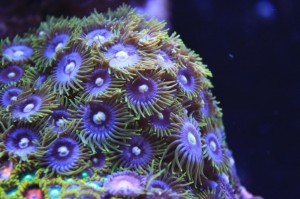 To remedy the ugly overflow box, there are several things you can do. For starters, you can purchase a tank with an external overflow box. The external overflow is gaining tremendous popularity with reef keepers who want to focus on the inhabitants of the tank as opposed to the equipment. These overflows are not visible in the aquarium and are typically located on the side of the tank that is sitting against or near a wall. Additionally, they do not take up any internal aquarium volume. In fact, external overflows actually add water volume to your system. 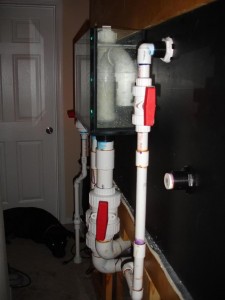 But what do you do if your tank is already set up, or you can’t afford a custom setup with an external overflow? The answer here is simple. Hide the overflow box. Simply stack your live rock around the internal overflow box or grow corals on it. Stacking rockwork around the overflow box can certainly help hide it. When aquascaping, just be sure to build a solid base of rock around the overflow box, and then stack rocks on top of each other until the overflow is well hidden. This technique works especially well in tanks that have an overflow that isn’t located against a wall, but is out in middle of the setup (e.g. overflows in aquariums meant to be viewed from all four sides or cylinder aquariums). However, in well established aquariums or those that are too narrow to form a solid rock structure that goes from the sand bed and almost to the waterline, adding live rock to hide the overflow will not work and something else must be used. This is where corals come into play. 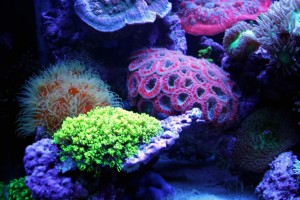 Many different types of corals can be used to hide an overflow box. Zoanthids, Palythoas, and green star polyps are a few of the soft corals that many people use. Additionally, encrusting corals such as Montipora species and Acropora species can be used. On one of my previous tanks, I had a mix of all of the elements I have described. The tank was an Oceanic 90-gallon Reef Ready aquarium. I stacked rock to the half-way point and added various corals to the overflow box. My overflow was covered in Zoanthids, Acropora millepora, and it even had a green bubble tip anemone clone attached. The purple coralline algae was also present, but it didn’t do much in terms of hiding the overflow box. 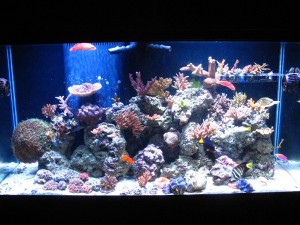