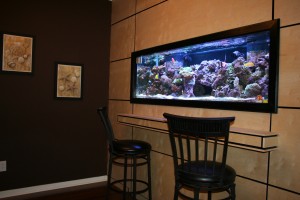 This is the writeup for the AquaNerd January Tank of the Month contest winner. This month’s winner is Will  from Pearland, Texas. He will be receiving a full line of aquavitro products from Seachem. Below is a little information about Will’s aquarium along with lots of pictures of his gorgeous reef aquarium.

Favorite fish and why:

My blue hippo has been with me through the tough times. Before starting my current tank he was the only survivor of an ich outbreak. During that time he contracted and fought off ich 4 times. Since he has been in the 180 I have dealt with ich once from a sohal tang and the hippo caught it. But we were not worried in the least because its obvious he is a strong fish and is able to fight off infections. In addition to being tough as nails, he is the friendliest fish ever! New comers are always greeted in a friendly manner. It’s almost like he’s the kid at school who befriends the new guy just because he is a good person and wants the newcomer to feel welcome.

Favorite SPS and why:

Favorite LPS and why:

Frogspawn. The two large ones are next to each other and are massive! Their movement always catches an eye.

Favorite Softy and why:

I used to perform water changes once a week religiously and still ran into algae problems about 8 months in. I decided to take a more hands off approach and get rid of some livestock. Since then I have performed an 18% water change every month, maybe 3 weeks. This seems to let the system balance itself and not cause any major disruptions in chemistry. After laying off on the water changes and livestock I have had zero algae. 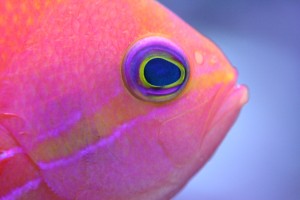 I usually feed 2 cubes of a combination of spirulina brine, brine, blood worms, and veggie mix. Some days I will feed one cube and a quarter sheet of a veggie treat. I feel like this is the right amount for my fish currently without a build-up of nutrients. Currently I add no supplements manually. 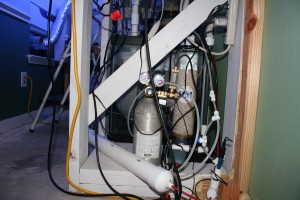 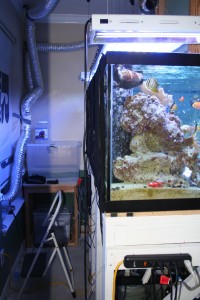 One small box fan blowing across the top of the display. As well as two exhaust fans pulling hot air from above out to the world.

Tridacna clams Next to Each Other

All LPS have grown quite a bit in the past 1 and couple months. Candycane grew from 3 heads to 20 in 18 months. Duncan grew from 3 heads to 10 or more in 12 months. Blue anthelia, well, just read below. Some SPS such as my montis and pocillipora grow about 1 inch a month. No exaggeration there, I have to prune then often. Acros grow at about ¼ inch in 1-2 months. I suppose if I paid more attention to the Mg in my water they could grow a little faster, but I am happy with the current rate. 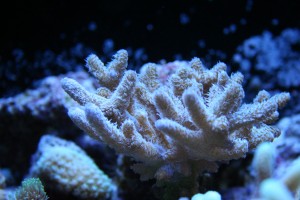 If you look closely in my tank you will see that the purple tint to all of the rocks is not from coralline algae. Blue anthelia is everywhere in my tank! And I don’t mind. It’s pretty neat to see it everywhere and have people that know no better ask if the rock is alive. Every couple of months the anthelia will spawn and the tank will have eggs floating everywhere for about 2 days. 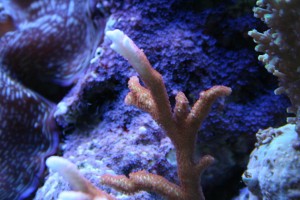 Fire and Ice Digitata with Blue Clove Polyps in the Background

Aptasia – I have it everywhere. I have fought that battle before and its never ending. But in my system (can’t speak for everyone) the aptasia do no harm. They are in constant contact with the blue anthelia in particular with no adverse effects. They touch other corals as well with no problems. I do not believe they are harmful to a system. But that is my opinion from my experience. 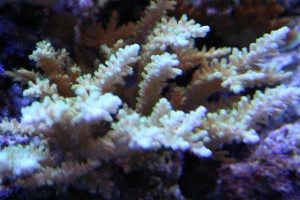 It would be impossible to have my tank in its current state without help from fellow hobbyist and internet forums; absolutely impossible. Thank you very much and I’m glad we can share interest in such a rewarding, yet expensive hobby. 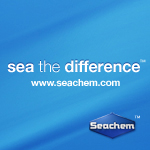 Seachem is our sponsor for January’s Tank of the Month contest, and they have generously donated a full set of their aquavitro product line.