Trending
You are at:Home»General»Elysia chlorotica is Part Plant, Part Animal 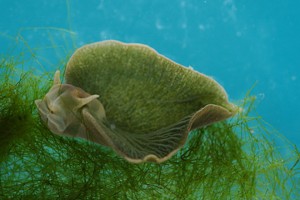 It has been widely known that various sea slugs found throughout the ocean capture cells from things they eat and incorporate them into their own tissue. Anemone eating nudibranchs utilize the stinging cells (nematocysts) of its food as a form of defense. The slug eats the anemone and puts the stinging cells into fleshy appendages that adorn its back. This same sort of behavior can be found in algae eating sea slugs as well. Except with these slugs, the cells being used are chloroplasts, which generate food via photosynthesis.

But researches have recently discovered another aspect of the cell pirating performed by the sea slugs. The Elysia chlorotica slug has apparently stolen enough of the genes of its food source to actually make chlorophyll, a product required by the chloroplasts to make food. This discovery was made by researchers at the University of South Florida and shows that this slug is the first animal to actually produce this chlorphyll all on its own.

One of the researchers went on to emphasize that this sea slug goes beyond the limits of corals that host photosynthetic microbes. The photosynthetic microorganisms of the corals live in crevices on the host’s cells. The slug, on the other hand, takes just parts of cells, and incorporates them into its own cells. And unlike other sea slugs, E. chlorotica preserves the stolen organelles in working order for its entire life and can live off of the food they produce. The scientists have shown that once a slug has ingested its first chloroplast meal, it does not have to eat again for the rest of its life. Additionally, it was shown that unhatched sea slugs carry the genes to make chlorophyll, further showing how advanced this particular species of sea slug actually is.

Photo and Story Courtesy of:
WiredScience