According to an AP report, California waters are seeing a massive influx of giant squid.

Over the past week or so, the Humbolt squid have been migrating into Californian waters. These squid, though not exactly giants, can grow up to 100 pounds and reach 6 feet long. Anglers in the area are frequently catching squid in the 20 to 40 pound range, with the occasional squid nearing 60 pounds.

The immigration of the Humbolt squid into Southern California waters isn’t as rare as some might believe. These huge creatures inhabit Eastern Pacific waters and venture into the coastal areas every few years. In 2004, over 1,500 squid washed ashore in Washington. Additionally, the Gulf of California frequently sees these large gatherings of Humboldt squid. 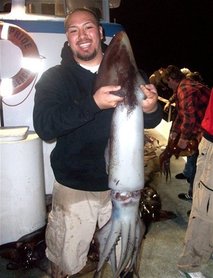 The History Channel has several television shows dedicated to the Humboldt squid and their highly aggressive behaviors, which normally occur during the mating season.