Trending
You are at:Home»Reef Conservation»World’s Coral Reefs Could Disintegrate by 2100 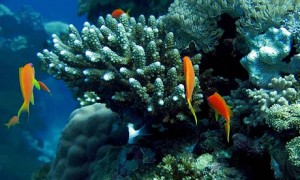 Coral Reef in the Red Sea

Researchers at Carnegie Institution have recently indicated that rising CO2 in the atmosphere could begin overwhelming coral reefs. Trends in CO2 data lead scientists to believe that thousands of coral reefs will disintegrateby the year 2100.

As more CO2 is released into the atmosphere, the more acidic the oceans become. This is alarming, given that coral living on reefs throughout the world will beput in great risk. Researchers predict that more than 9,000 coral reefs will disintegrate when carbon dioxide in the atmosphere reaches 560 parts per million. Currently, the atmosphere has approximately 388 ppm CO2, but this level is expected to rise.

Corals grow by forming a calcium carbonate-based skeleton. They take in calcium ions and deposit them as aragonite. As many of us with calcium reactors know, a lower pH can dissolve calcium carbonate material. This effect will not only prevent new coral formation, but also destroy already formed corals. And as the ocean takes on more CO2, the pH will continue to drop and exacerbate the issue.