Trending
You are at:Home»Reef Conservation»Is the Saltwater Aquarium Hobby Sustainable? 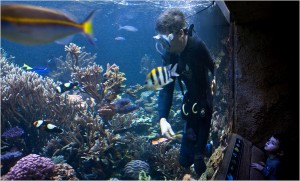 A recent New York Times article highlighting the saltwater aquarium hobby asks the question, “Is the saltwater aquarium hobby sustainable?”. There are currently over 700,000 saltwater home aquariums in the US alone, and the article and opinions from a few scientists fall on both sides of this situation. Some argue that the massive collecting of Florida invertebrates is putting a strain on the ecosystem, while others suggest that aquarium-minded collectors are a special type of fisherman and are concerned with the sustainability of the fishery.

The aquarium hobby has been growing constantly for the last 30 years. Gone are the days of medium-sized aquariums filled with cheap decorations, undergravel filters, and a few fish. Today, the modern reef aquarium keeper tries his or her hardest to mimic nature down to the very last detail. We use live rock, invertebrates, fish, and corals lifted straight from the ocean…and this harvesting of the reefs can have an impact.

Harvesting corals from the ocean has been a hot-button issue with many people for years. Fear of man’s impact on nature has led to many regulations being put in place. And over the years several organizations have arisen to increase awareness of the threat to coral reefs. But a new issue has arisen, one which this New York Times article focuses on, and that is the harvesting of reef invertebrates, specifically the blue legged hermit crabs.

The blue legged hermit crabs are native to Florida and do a marvelous job of eating detritus and algae in both nature and in our aquariums. They stay small and do not slaughter aquarium snails to the extent that most hermit crabs do, making them extremely attractive to aquarium owners. Their increasing popularity has lead to massive harvesting of these and other invertebrates, raising red flags with scientists. If a species or group of different species is over-harvested, there can be a cascading effect in the reef ecosystem. The invertebrates that graze on algae will diminish significantly in overall numbers and corals may be overtaken by algae, which can cause coral death.

At the opposite end of the spectrum, some scientists feel the aquarium hobby is sustainable, citing the fact that most collectors behave differently than the traditional fishermen. The collectors are viewed as a more responsible group of people. They understand the ecosystem more and are less likely to over-harvest any one particular animal. Livestock collectors also care more for the environment and will welcome most regulations on the industry to some extent.

The article is a great read for any of those interested. I personally feel that this hobby, overall, is NOT as sustainable as most people assume it to be. There is a lot of die-off that occurs en route from collection to fish store and even more after the livestock has been added to the tank. Most people simply don’t see just how many fish, corals, and invertebrates die. Additionally, there are too many people that get into saltwater and reef aquariums with very little knowledge of the animals themselves or how to properly run a well-balanced and stable system. They buy the equipment, kill several fish, then get out of the hobby. I’ll get off my soap box for now, but please keep in mind that this hobby does have an impact on nature and we need to do what we can to make that impact as small as possible.