Trending
You are at:Home»Reef Conservation»Protection For Two Shark Species Fails 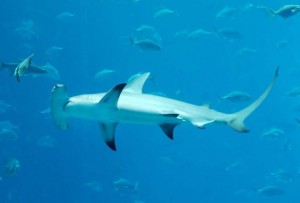 In a recent AP news story on Yahoo!, it was revealed that proposals to protect hammerhead and oceanic whitetip sharks at the Convention on International Trade in Endangered Species have been defeated by Japan and China. These, among other proposals, were part of a United States-backed campaign to help protect several species and increase global conservation. Japan and China also defeated an export ban on Atlantic bluefin tuna, a proposal to regulate the coral trade, and another shark conservation plan. Japan led the charge against conservation, with China, Indonesia and other nations that benefit from shark fin trading backing them all the way. Critics accused Japan and the other countries of putting business and politics ahead of conservation efforts, but the countries fighting conservation efforts replied by saying that restrictions were not the answer and would be difficult to apply.

Delving further into the article, a very alarming figure arises.

Widespread illegal fishing and caused populations of the endangered scalloped hammerhead, great hammerhead and the threatened smooth hammerhead to plummet by as much as 85 percent. Oceanic whitetip sharks face similar threats and their numbers are down 60 percent to 70 percent.