Trending
You are at:Home»Reef Conservation»What if All of the Coral Reefs Die 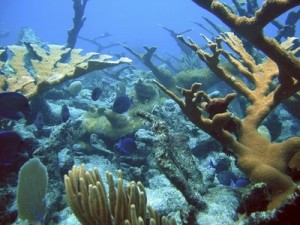 An interesting story from Yahoo! came out today, discussing the vast importance of coral reefs on the rest of the world. The article is somewhat of a gloom-and-doom, but it brings up very important points. Coral reefs are dying, and they are going to get worse. This scares many scientists because wild reefs are the base of the oceanic food chain. Hundreds of millions, if not billions, of people depend on fishing and most of the fish caught spend part or all of their lives on the reef.

Imagine if all of the world’s coral reefs simply vanished. The ocean would become almost entirely devoid of life, with the exception of deep water vent organisms. Fishing villages would quickly disappear, followed more slowly by entire countries. Hunger, poverty, and political instability would quickly arise and there’s no telling what else might happen.

At least 19 percent of the world’s coral reefs are already gone, including some 50 percent of those in the Caribbean. An additional 15 percent could be dead within 20 years, according to the National Oceanic and Atmospheric Administration.

The economic damage from losing coral reefs would be enormous. According to the United Nations, ocean-based fishing provides jobs for 38 million people.