Trending
You are at:Home»Aquarium Livestock»The Right Breeder for the PNG Lightning Clownfish

As promised, we have uncovered the breeder that was hand selected by Blue Zoo Aquatics to breed the massively popular and wildly patterned PNG Lightning Maroon Clownfish. According to Blue Zoo, multiple bids started coming in for this fish instantly. Some of the bids even exceeded $5000. But Blue Zoo didn’t cater to the highest dollar amount. Instead, they did the smart thing and sought to sell it to someone who could properly care for and breed this magnificent fish. They had a very short list of potential candidates, and in the end, MASNA award winning marine fish breeder Matt Perdersen was selected to breed the PNG Lightning Clown. 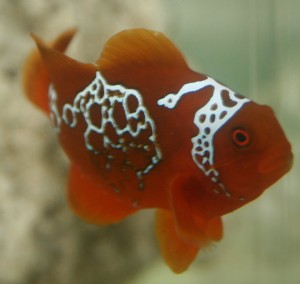 Matt Pederson earned his fish breeding respect by sucessfully breeding harlequin filefish, a notoriously difficult fish to keep alive and well fed. But there was a slight bump in the road where Matt is concerned…he doesn’t like designer clownfish. He apparently stands against man-made hybridization that has recently popped up in this hobby over the last few years. Luckily for those seeking this clownfish in mass numbers, the PNG Lightning clown is 100% natural, so Matt won’t have to abandone any of his principals.

Two days ago, the PNG lightning maroon clownfish was shipped to Matt Pedersen, along with a large femail clownfish collected from the same reef. Blue Zoo is also planning to obtain at least two more juveniles from the same PNG reef in the event that the initial pairing is unsuccessful. I’m not sure if these two juveniles will also be Lightning Maroon Clowns, or just normal looking clowns.