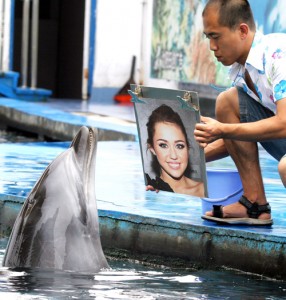 I’m not sure if I should be grabbing my sides in laughter or feeling embarrassed that my Alma mater (Texas A&M) is studying something so ridiculous.  At first, I thought their study on dolphins and their ability, or apparently lack thereof, to mock celebrities was a joke. In fact, I’m still not even sure if this story is real or not, but it’s a story from The Onion so we won’t put too much weight behind it. According to a paper recently published in the journal Science, when dolphins were presented with photos of famous personalities (e.g. movie stars and musicians), they failed to mock the public figures. Apparently, the fact that these dolphins lack the ability to mock, impersonate, or even ridicule celebrities was shocking. Professor Michael Hodges, lead author of the study and someone I’ve never heard of, had this to say, “Given their impressive brain-to-body ratio, we believed dolphins would be capable of trashing Lady Gaga, or at the very least, succeed in rolling their eyes at Kendra Wilkinson’s post-baby weight gain. Instead, all we observed were blank, snarkless stares.”