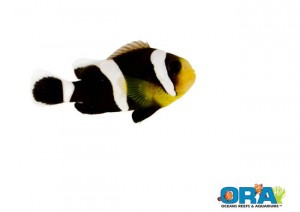 Looks like ORA has been quite busy. They just released information about their new ORA Red Goniopora and now information has come out about two ORA Black Saddleback Clownfish (Amphiprion polymnus). The first ORA Saddleback is more black than wild Saddlebacks (which are kind of brown), but has the traditional stripes. The second Saddleback is a misbar, meaning its white stripes (or bars) are either not symmetrical or are simply different than normal looking clownfish.

See below for an official press release from ORA… 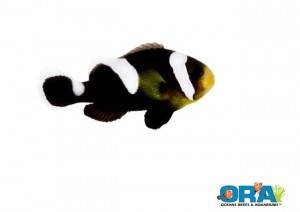 ORA is introducing a new clownfish variety this month, the true Black Saddleback (Amphiprion polymnus). This is not a black version of the normal brown polymnus, rather it is a completely different morph. The true Black Polymnus differs from the normal brown variant by having a complete middle bar rather than the distinctive saddle. Many of them have a third bar before the tail as well.

We are very excited to finally be breeding this fish as it is considered to be one of the most difficult species to breed in captivity. In fact, it took us short of ten years of hard work before getting them to finally produce eggs. We would like to thank Werner Menzel of Meerwasser Center Menzel in Germany for trusting us with his colony of these fish.

The first couple of batches that we will have consist mostly of misbars. They have beautiful black coloration with a brilliant white border around the tail but their middle bars do not extend the full height of the body.