Trending
You are at:Home»Reef Conservation»Toxins and Heavy Metals Accumulating in Whales 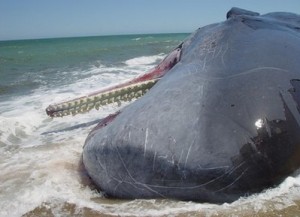 Another disturbing trend growing in our oceans today is the amount of toxins and heavy metals showing up in the blood and tissues of whales. Researchers, over a 5-year period, took tissue samples from 955 living whales all over the globe. The scientists found high levels of cadmium, aluminum, chromium, lead, silver, mercury and titanium in almost all of the whales. Mercury, a metal long known to be accumulating in fish, was found to be around 2.4 parts-per-million (ppm) on average. Shockingly though, some whales even had concentrations up to 16 ppm Mercury. To put this all in perspective, fish considered to be high in Mercury, sharks and swordfish, only have about 1 ppm Mercury. Even at this concentration, children and pregnant women are warned against eating these fish. Additionally, Chromium, a known human carcinogen, was found in all but two of the 361 sperm whales that were tested in the study. I am very curious to see studies like this performed on a wider variety of fish, aquatic mammals, and invertebrates. I would be willing to bet that this trend is not exclusive to whales or game fish, but seen all over.