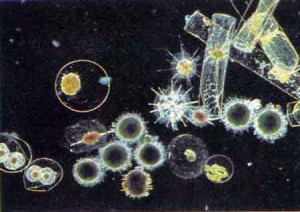 According to a recent Nature article, plankton levels have declined significantly over the past century. The decline over the past 50 years alone is over 40%. Phytoplankton, though extremely tiny and seemingly insignificant, play a crucial role in the ocean’s food webs. Juvenile fish, whales, filter feeding invertebrates, corals, and a whole slew of other creatures depend directly on plankton for survival. Indirectly, every other animal in the world depends on phytoplankton for their survival as well.

Phytoplankton also absorb CO2; so with massive global decline, we’ll likely see an increase in the greenhouse gas in both our air and in the oceans. This increase in CO2 will likely feed back into the cycle of plankton decline, as increase water temperatures are the likely cause of the decline already. Additionally, an increase in CO2 has also caused acidification of the ocean. Due to the fact that a lot of species that fall under the “Phytoplankton Umbrella” are comprised of a calcareous skeleton, the acidification will slow the growth and reproduction of the already struggling plankton.