Trending
You are at:Home»General»Whale Unleashes Fury on Sailboat 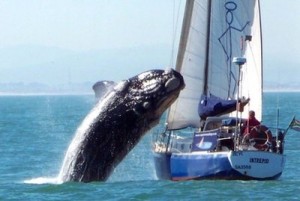 Whale watching can be a fun and breathtaking experience. It apparently can be a very dangerous one as well, as these boaters quickly found out. In a recent Yahoo! News story, an extremely large whale was breaching near a yacht when the boat got too close. When the whale breached one final time, it landed on the boat. The whale was fine, but the boat and its crew didn’t fair so well. As can be seen in the picture below, the boat suffered quite a bit of damage. The mast was knocked over and two people were injured. 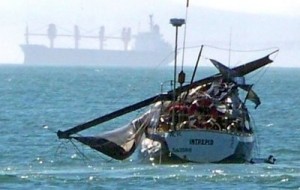 There’s quite a bit of speculation as to whether or not this event actually happened. Some think the picture is a hoax put on by the sailing company and others are claiming the event is real. Some are even making the claim that the crew was purposefully agitating the whale, causing it to retaliate.

This occurrence, though extremely rare, can happen when traveling near all sorts of large animals. I’ve heard stories of people getting tipped over by basking sharks and other large aquatic life while kayaking or using other small boats when whale or shark watching.