A friend from a local aquarium club has recently had quite a bit of success with a pair of Harlequin Filefish, and he wanted to share his adventure. The bonded pair was purchased from LiveAquaria, one of our favorite online livestock retailers. The usually finicky eaters were then coaxed into taking prepared foods. This was achieved by adding Instant Ocean gel food to a dead stem of a green Slimer Acropora coral skeleton. Since these fish naturally eat coral polyps, they seem to take to the prepared food a bit more easily when it is covering a natural food source. This is a technique that I would suggest for finicky tangs as well. I would often tell people who purchased tangs that refused to eat, to attach a piece of algae to the rock work with a rubber band. The grazing fish would hopefully come across the algae in its daily activities and learn to eat it regularly. 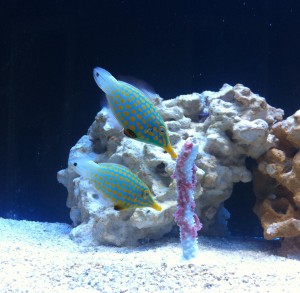 The beautiful Harlequin filefish are very difficult to care for. They primarily feed on Acropora polyps, but with proper attention and trial and error, they may eventually take prepared foods. Obviously this filefish isn’t reef safe, but it seems that SPS keepers are the primary owners of these fish. This may be for the obvious reason that you have to have a steady supply of food for the filefish, but it also might be because the “colored stick” keepers want a challenge or simply think the fish is very unique.

Case in point, Eric Borneman, a very well known author and a good friend of mine, fell in love with the Harlequin Filefish when he gave an identification workshop at a fish store where I was working. Eric let the filefish loose in one of his reef tanks and watched in amazement at this fish’s behavior. He told me the fish seemed to prefer one or two colonies and that it wasn’t a voracious eater. The corals were obviously not too pleased with the new resident, but there didn’t seem to be any tissue loss or death. Additionally, the filefish would take up residence in the branches of the larger Acro colonies at night, further adding to the fish’s intrigue.