Trending
You are at:Home»Aquarium Livestock»ORA Unleashes Blue Mandarin Onto the Public 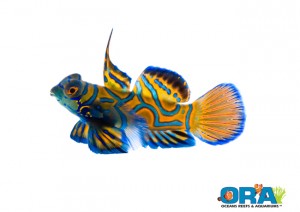 Hot on the heals of the release of the captive-bred Spotted Mandarin, ORA is set to release their Blue Mandarin as well. The blue mandarins (Synchiropus splendidus) will be offered singly as males only, or in male/female pairs. ORA  notes that the fish are reaching sexual maturity earlier than usual. This causes the females to be smaller because they are focusing their energy on egg production instead of growth. Additionally, male mandarins have been seen gathering in small groups and trying to mate with each other. If a female approaches these groups of males, they are aggressively chased away. In terms of feeding, the blue mandarins have been off of live food for several months. Instead, they are eating Nutramar Ova, finely chopped Hikari Blood Worms, fish roe, frozen baby brine shrimp, frozen daphnia and New Life SPECTRUM Small Fish Formula pellets according to ORA. This bodes well for hobbyists as the fish are taking a wide variety of prepared foods.

Continue reading below for an official press release from ORA.

Hot on the heels of our Spotted Mandarins, ORA is pleased to announce that our first batch of Blue Mandarins (Synchiropus splendidus) is now available. We will be offering a limited number of Male/Female pairs as well as single males. The males are slightly larger than the Spotteds that we released last month but the females are a little smaller. It seems that the females are putting all of their energy into egg production now instead of growth. Most of them look like they have swallowed a pea.

We are seeing spawning behavior with these fish every day but there is a twist. The males will gather in groups of 2 to 4 fish and try to spawn with each other. When the females come close they aggressively chase them away. When the males aren’t trying to spawn with one another they are busy chasing each other and nipping fins. You may see a little bit of fin damage in some of the fish that we will be shipping out, we expect this to heal up quickly and we ask for your patience and understanding.

When we first started to breed these fish back in October we were setting up Blue, Red and Spotted spawns in the same larval tanks. There is even a possibility that some of the spawns were a cross between the Blue and the Red variety. Some of the fish shipping out this month have a lot of iridescent red in them but they do not have solid red pelvic fins. We have since purposely made the Blue x Red cross and we will report what the offspring look like in a couple more months.

This batch of Blue Mandarins has been off of live food since March. They are offered the same frozen and dry food selection that our Spotted Mandarins are given, Nutramar Ova, finely chopped Hikari Blood Worms, fish roe, frozen baby brine shrimp, frozen daphnia and New Life SPECTRUM Small Fish Formula pellets. These guys do seem to prefer pellets over Nutramar Ova, especially as they get older.

We are especially proud of these Mandarins and will be sad to see them go. We are steadily improving our techniques to raise these beautiful fish, and we hope to have both species of Mandarins consistently available within a few months.