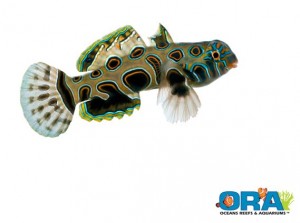 It’s official. As of yesterday the new captive bred ORA Mandarin dragonette is available to aquarium hobbyists. These previously hard to care for fish have now been successfully raised in captivity and trained to eat prepared foods. In the wild, dragonettes eat copepods and other tiny crustaceans, that just aren’t as available in the home aquarium. The mandarin will survive for a few months, but will eat up its food source quickly, then slowly starve. ORA has apparently solved this issue, though they still warn that the captive bred mandarins should still be fed twice a day and with a variety of foods.

A few other things to note are that the ORA Mandarins are “naive”. According to ORA, these fish have led a sheltered existence and may not be “reef-smart”. By that, they mean the fish haven’t developed defensive strategies to avoid larger fish which could eat the mandarin. One other thing ORA is amazed by is the early sexual development in these fish. They go on to explain that they will be offering ORA Mandarin pairs, though it will be difficult to distinguish between male and female due to a lack of sexual dimorphism.

Currently, fish stores are only allowed two mandarins per order. There’s no info on prices for these fish yet, so we’ll just have to wait for it. Until then, feel free to read the ORA Press Release below for more information.

ORA biologists have been hard at work developing the methods to breed and raise the Blue Mandarin, (Synchiropus splendidus) and the Spotted Mandarin, (Synchiropus picturatus.) The first wave of these captivating beauties is now ready to charm hobbyists all across the country. Even though they are some of the most attractive and popular aquarium fish in the industry, many wild-caught mandarins are difficult to feed and despite best efforts, most of them fail to thrive in aquariums. ORA has eliminated this heart-breaking problem by training our captive-bred mandarins to eat a variety of commercially available frozen foods and pellets. Now the average aquarist can enjoy the convenience of finding readily available (and affordable) food sources for their exquisite ORA dragonettes.

Caring for ORA Mandarins isn’t as simple as throwing a cube of frozen food and pinch of pellets in the aquarium a couple of times a week. At approximately 1.25”-1.5” in length, ORA’s Spotted Mandarins are still growing and have voracious appetites. We recommend frequent feedings – at least twice daily. Some of the frozen foods that they readily accept include: finely chopped Hikari Blood Worms, Nutramar Ova (prawn eggs), fish roe, and baby brine shrimp. They are also accustomed to eating New Life SPECTRUM Small Fish Formula pellets.

Our experience has shown that these young fish begin to grow rapidly when they are kept in a reef environment. We believe that while our mandarins can survive on 100% commercial diets, they will thrive in an environment that offers them a combination of frozen, pellet and live foods.

ORA is tremendously proud of the mandarins we have been nurturing for almost one year. We admit, we’re also feeling a bit protective of them and we want every single one of them to be successful in their new homes. It is important for everyone to understand that ORA’s mandarins have led a sheltered existence in the hatchery and they are very naive. We wish to caution all store owners and hobbyists that these baby mandarins are not yet “reef-smart” and should not be kept with fish large enough to eat them or show aggression to them. We have been amazed to observe that even at this small size our mandarins are reaching sexual maturity. In the future we intend to offer pairs, but at approximately 1.5” it is difficult to distinguish a female from a subordinate male with any certainty. Despite their petite size, we’re sure you’ll agree that ORA’s Spotted Mandarins are some of the prettiest fish ever produced. They have colorful masks and their green scaleless bodies sport exquisite circular patterns of turquoise, royal blue, orange and black.

These charismatic fish have such peaceful temperaments even seahorse lovers can consider adding an ORA Mandarin (or two) to the tank.

News of our dragonette success has been far-reaching and we thank everyone for their support and patience. Unfortunately we are only able to release limited numbers of the Spotted Mandarins this month with a strict limit of 2. If you miss the initial release, please don’t worry. We have many more staged up and it won’t be long before they are eating 100% commercial diets too.

As we continue to discover more efficient ways to raise baby mandarins, our success rate will improve and we hope to have both species of mandarins consistently available on the price list within a few months.