Trending
You are at:Home»Reef Conservation»Surfers Save Their Nemesis, a Stranded Great White Shark 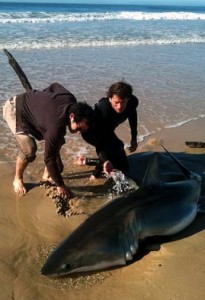 There’s no doubt the great white shark is the most popular shark species among t.v. watchers. Surfers on the other hand might not feel the same way, since many surfers lose their boards, limbs, or lives to these efficient hunting machines. Despite this relationship, a surfer and another beachgoer attempted to save a stranded white shark on a beach in Australia. The 10-foot shark was still alive upon discovery, but it needed a hand getting back into the ocean. The two individuals worked hard to get the shark back into the water, eventually having success. The shark very slowly swam away once it was moved to waist-deep water. Even though the shark swam away, the next day it was discovered on the beach, missing its jaws. Someone else discovered the shark, which was presumed dead, and decided to take a souvenir. In Australia, it’s illegal to own any part of a great white shark, which is considered a threatened species.