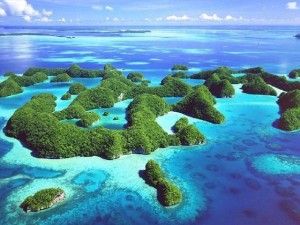 Here is some great news for marine mammals, sharks, and other marine life. Palau, a cluster of islands in the Pacific Ocean, has recently announced that all of its oceans will be deemed a giant marine sanctuary. The 600,000 square kilometers of ocean surrounding the islands are home to many different species of whales, sharks, dolphins, and countless other marine animals. These include a breeding population of sperm whales and is a long-term home to at least 10 other whale species. Another 30 or so species of dolphins and whales also frequent the area.

This announcement comes about a year after Palua President Johnson Toribiong announced that the surrounding oceans would become a shark sanctuary while at the United Nations General Assembly. The announcement and associated literature are a bit vague on what it means by “other species”, so there’s no telling what impact this will have on our hobby. I’m assuming that it won’t be much, since diving and other tourism activities are the big money makers for Palau. The primary focus for this declaration is shark and marine mammal protection, which as we all know is in dire need for that part of the world.