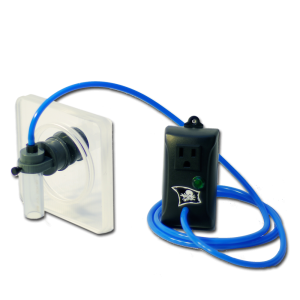 AVAST Marine Works has released a new automatic water top-off system that will feature the same pressure switch found on their Davy Jones’ Skimmate Locker. This pressure switch, which operates off increasing and decreasing air pressure in the tiny cylinder seen in the picture above, will kill power to the attached outlet when the water level in the sump is elevated. As the water in your sump drops, the switch restores power to the outlet, which is hopefully hooked up to a water pump in a freshwater reservoir. AVAST touts that their switch cannot be clogged up by wandering snails or calcium deposits since there are no moving parts. Additionally, the switch is capable of going through 10+million cycles (aka years of flawless topping off) and maintaining the sump water level within a 1/2″ tolerance.

Another great feature to this auto top-off is that it uses a magnetic mount that is capable of mounting to 3/4″ thick glass. You won’t need those ugly brackets to hold the sensor in place. Not to mention, relocating the pressure switch would be a breeze since you won’t have to detach anything or fiddle with a bracket. The price on these units is set at $70, which comes in a bit cheaper than the competition.