Trending
You are at:Home»Reef Conservation»Toxic Algae Can Wipe Out Entire Reefs 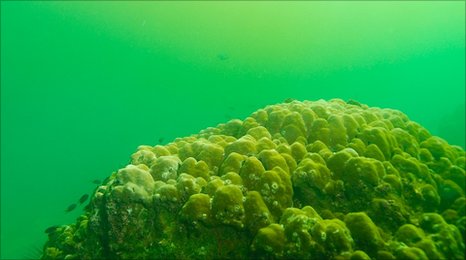 According to a BBC Earth News story, scientists are warning against the effects of large algae blooms on coral reefs. In a recent large-scale bloom in the Gulf of Oman, an entire reef was virtually wiped out in only a 3-week period. The scientists noted that approximately 95% of the coral died and they observed 70% fewer fish in the area. Of the corals affected, cauliflower (Pocillopora damicornis) and table top (Acropora arabensis) seemed to take the brunt of it, being completely wiped out. The lack of fish, as the study indicates, came after the reef was wiped out. Though the report doesn’t discuss any fish death, I would assume that many fish did in fact die as a result of the algae bloom.

The blooms, typically a result of nutrient runoff from land, starve the corals of both oxygen and sunlight. They can also clog the gills of fish and invertebrates, further inhibiting their respiratory abilities.