Trending
You are at:Home»Aquarium Livestock»White Zebrasoma flavescens Seen in the Wild 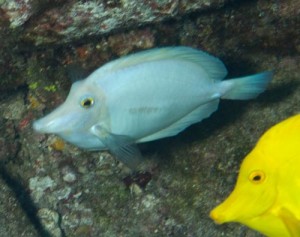 Here’s a fairly unique yellow tang (Zebrasoma flavescens)  that has been repeatedly spotted in a small stretch of reef in Hawaii. Hawaiifishes.com tells us that this particular fish not only appears in the same 10 sq ft area of reef every time, but that its white coloration has progressed from a small patch to eventually cover its entire body. Most of the people who have spotted this fish think it is an albino, which isn’t exactly accurate. Sure, the fish is lacking pigmentation for the most part, but the progression of the white patches should indicate a genetic mutation, or to a much lesser probability a disease. Regardless, this fish is both unique and eye catching.

The color change of this fish apparently took around 4 years to complete, at least according to timestamps associated with the photos. The adult tang still retained a lot of yellow coloration, but over time the yellow gave way to white.

More pictures of this tang can be seen below. They are arranged in such a way that the white can be seen slowly taking over the tang’s entire body. 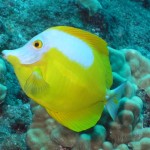 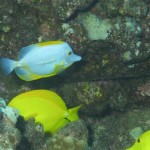 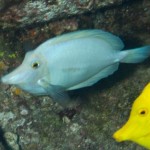 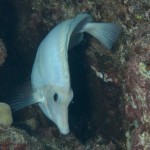