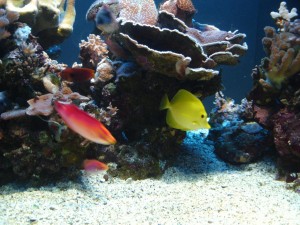 According to a recent Star Advertiser story, scientists have more evidence indicating that no-fishing zones (or Marine Protected Areas) will help fish populations in entirely different parts of the ocean. Genetic studies performed on a little over 1,000 yellow tangs revealed that offspring of the fish could be found over 100 miles away. Additionally, some tangs in unprotected areas were genetically linked to parents inside protected areas, further bolstering the need for an increased number of MPAs.

Because a great deal of marine fish are broadcast spawners, they rely on ocean currents to carry their eggs and sperm, along with resulting fry, off to far away places. Until now, the fact that fish in unprotected areas could come from those in protected areas was really only based on computer generated models and theory. However, this new genetic evidence will more firmly cement the notion. In fact, several more protected areas have popped up in Southern California, and expect to see more of them in other areas as well.