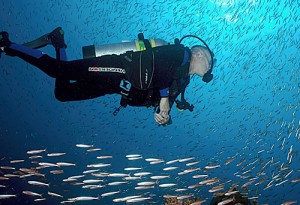 According to a recent story on the Galveston Daily News, the Flower Garden Bank sanctuary has drafted management plans that would govern operations of the sanctuary over the next 5-10 years. The new plan also calls for the expansion of the sanctuary, along with special designation of a research area within the FGB. The expansion is in response to the extensive damaging of reefs located on boundaries of the sanctuary due to boat anchoring. For those already familiar with the Flower Gardens, you might recall that anchoring within the sanctuary isn’t allowed. Instead, boats are required to tie off to mooring buoys installed over the reefs. Anchors have been very detrimental to the reefs over the last several years mostly due to the Flower Garden Bank’s close proximity to the Gulf Coast. Weekenders could easily make a day trip out to the sanctuary and do a little recreational diving.

The management team currently overseeing the sanctuary is inviting residents of Galveston County to comment on the proposed management plan through January 20th.